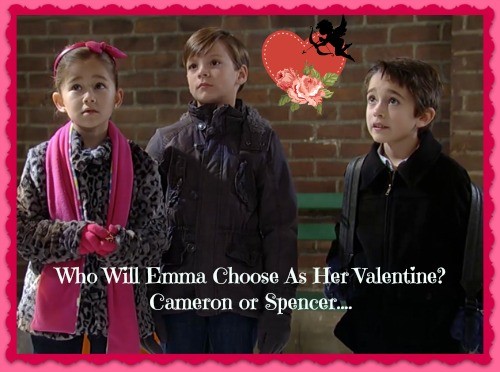 If there is one thing the General Hospital that we know and love is good for, it’s giving us an unrealistic template for what love should look like. Valentine’s Day is quickly approaching and Port Charles is just dripping with love. CDL has on good authority that someone is getting engaged on Valentines Day. The only question is who? Let’s explore our options shall we?

First we have Morgan and Ava, the star crossed cougar. Out of Sonny’s menagerie of mismatched kids, Morgan is probably the least intelligent and it would certainly make for a good story if he and Ava decided to elope during their forbidden valentine’s day meeting. Sonny would blow a blood vessel and it wouldn’t be GH if Carly didn’t come home from a near death experience to find her son married to a handsome woman who looks like one of those chicks from Death Becomes Her. Speaking of Carly, it looks like she ultimately escapes Heather and ends up at the bedside of an unconscious Franco, urging him to wake up. I’m pretty sure Carly’s going to need a vacation, and possibly one of Brandi Glandville’s “happy pills” after the time she’s had.

Another potential couple on the list is Nikolas and Britt. Since Nikolas was initially my main draw to GH and let’s face it…he’s a real live freaking prince I give him a lot of rope; it’s just too bad that he usually ends up hanging himself with it in the relationship department. Nikolas, the nice Cassadine manages to find and fall in love with the worst women in Port Charles.

Gia, though relatively benign was the first selfish and superficial liar he hooked up with. Then he went on to Courtney, who had literally married every man Port Charles and was married when she started seeing the prince of passion. He even managed to pull the worst out of Liz, as her time with him turned him into a selfish liar and cheater. The only decent woman he ever married was Emily… but oh wait she was married when they got together as well. As a result of their transgression Zander went off the rails and ended up dying. Now, Nikolas is with Britt, who is as conniving and selfish as they come, when will this man learn? Let’s hope he doesn’t propose to Britt, Spencer is already turning out to be a piece of work, and with an influence like Britt, they might just be the new Stavros and Helena.

And finally Sonny and Olivia. I don’t even know where to start here. I have lost count of the many times Sonny has been engaged, married, and had a wife either murderd at the alter or shortly after they married. I think it’s pretty safe to say that maybe Sonny isn’t the marrying kind he’s becoming the Erica Kane of General Hospital, only his marriages usually end in fatalities rather than divorce. Poor Olivia does not deserve the drama that comes along with Sonny. She’s a good woman who did a bang up job raising his firstborn. She needs to marry a nice man just as her son married a nice lady. Sonny should spare her the heartbreak and refrain from proposing to her, if he does, I think it’s only fitting for the wardrobe department to design a white lace bullet proof vest for her to wear at the wedding.

Kiki and Michael bore me. They are no Lulu and Dante that’s for sure, and if they get engaged will anyone care?

Spencer/Emma/Cameron triangle gets an honorable mention for being totally gross. They did the same thing with Lucky, Nikolas, and Sarah Webber, but they were high schoolers. These are third graders at the most they are practically babies and I got the creepy crawly feeling when Cameron texted a picture of he and Emma sledding and sent it to Spencer. That is a grown up move, an immature grownup, but a grown up nonetheless. I mean, where can their relationship possibly progress too at such a young age? If GH is going to go this route they need to age those children, period. Children grow up too fast as it is and presenting them in grown up situations is dangerous.