General Hospital Spoilers Feb 10-14: The Truth About Britt’s Baby Comes Out and Mob War Escalates This Week on GH (VIDEO) 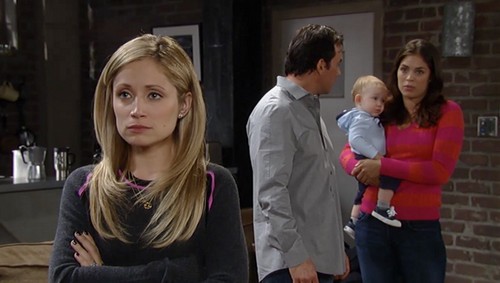 As per the usual on General Hospital, Port Charles is never a boring place to live and love. The week of February 10th will bring romance and danger to the residents of Port Charles and CDL has the latest spoilers right here.

Heather the unhinged still has Carly and an attempt to rescue her will actually put more people in danger leaving them to fight for their lives. Expect this story to wrap up soon with Heather’s endgame right around the corner and of course we all know that Heather is one crazy lady, so Carly is in real danger.

The mob war is heating up as Sonny’s main goal is to rid the world of anything and anyone associated with the Jeromes. Also, as if Morgan didn’t have enough on his plate, he has to deal with being in the middle of a Mob war while simultaneously sorting out his feelings for Ava and his dad. However, if Morgan can convince Ava to switch sides, there may be hope for the the star crossed lovers. Look for the truth about Baby Ben’s paternity to finally be discovered by Liz and Felix which means Britt is faced with an ultimatum, tell Nikolas the truth or Liz will.

When Anna arrests Silas, super attorney Alexis Davis demands his release. Meanwhile, Aj will begin to remember more about the night Connie was died, and that could have startling implications. Finally, In Port Charles, valentines day is more than just one day. All of our favorite couples get a temporary reprieve from their normal melodrama to celebrate love. Ava and Morgan make a clandestine date While Molly and TJ have a close call during a study date. While Duke attempts to reconcile with Anna, Sonny and Olivia have a romantic meeting, but don’t worry fans, there will still be tons of danger adventure and CDL will be here to recap every ounce of excitement.