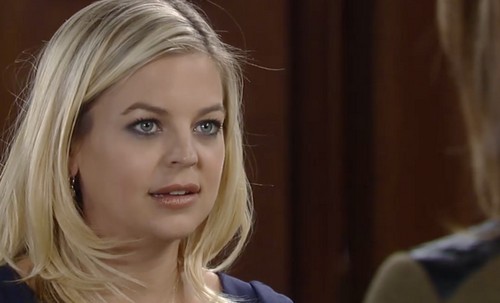 General Hospital spoilers for the week of December 22-26 tease some exciting holiday drama on the ABC soap, and rumor has it GH fans will not want to miss a single episode. Of course you will miss an episode on December 25 since GH is not showing an episode that day. Spoilers tease that it is Christmas time in Port Charles, and that means even Liesl Obrecht is on her best behavior. According to General Hospital spoilers, Liesl is in the giving mood and decides to do a huge favor for someone in Port Charles – rumor has it she helps Nathan’s girlfriend Maxie see her daughter, Georgie.

General Hospital spoilers tease that Port Charles’s former DEA Agent Jordan does not have a good Christmas. According to the latest edition of ABC Soaps, Jordan finds herself receiving a deadly threat from someone on Monday, December 22. Then, Police Commissioner Anna Devane guilts her into doing something she really doesn’t want to do later in the week.

In other General Hospital news, the week of December 22 kicks off with a surprise visitor appearing on Alexis’s doorstep. Some rumors have been floating around that it may be her long lost daughter, Kristina, but we are really hoping that it is Molly’s father, Ric Lansing. Meanwhile, tensions between Alexis and Julian Jerome mount during the holidays – as Julian tries to make his old flame jealous by cozying up to someone new.

So, GH fans, do you think Maxie will get to see her daughter Georgie on Christmas? Will Nathan’s mother Obrecht help? Who do you think threatens Jordan: Is her life in danger? What character do you think will show up at Alexis’s door? Let us know what you think in the comments below and don’t forget to check CDL tomorrow for more General Hospital spoilers and news.