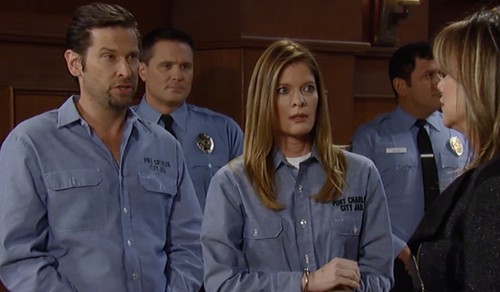 General Hospital spoilers tease that the Friday December 19 episode of the ABC soap will be packed full of must-see drama, and rumor has it GH fans will not want to miss a second of it. GH rumors have been flying around for weeks that Ric Lansing was headed back to Port Charles – and it looks like he has finally arrived, unfortunately he is bound and gagged in the trunk of the car. But, judging from the General Hospital spoiler video for December 19 – the race to save Ric is on!

In the General Hospital spoiler video for Friday’s episode Carlos sits on the trunk of the car eating an apple and talking to his prisoner, Carlos taunts, “It’ll all be over soon,” as you hear Ric trying to break free. Meanwhile in Pentonville, Sonny and Johnny Zacchara have heated conversation about Ric Lansing – and Sonny demands proof that he is alive. While Sonny deals with Johnny, Shawn is on the job and pleads with Jordan to help him find Ric before it is too late. Across town Julian Jerome pays Sam Morgan a visit – perhaps he needs her PI skills, or he might just need her to help smooth things over with her mother Alexis.

The General Hospital sneak peek of the December 19 episode of the ABC soap also teases that Nathan West is trying desperately to keep his promise to Maxie and makes a phone call to try and get Georgie to Port Charles on Christmas. It looks like Morgan is about to learn if he is a dad…or a big brother, Sonny prepares to deliver the DNA test results to him and Carly. Also, spoilers tease that on December 19 GH fans can expect to see Alexis head to court with her crazy clients Franco and Nina.

So GH fans, do you think that someone will save Ric Lansing – or will his big return to Port Charles be just to that the writers can officially kill off the character? Why do you think Julian needs to see Sam? Is Morgan the baby’s dad, or is Sonny? Will Alexis be able to get Franco and Nina off the hook for kidnapping? Let us know what you think in the comments below and don’t forget to check CDL tomorrow for more General Hospital spoilers and news.