Days of Our Lives Spoilers: Best Soap Wedding 2014 – General Hospital, Bold and the Beautiful, Young and the Restless (POLL)

BY Amanda Austin on December 18, 2014 | Comments: 2 comments
Related : Days of Our Lives, General Hospital, Soap Opera, Spoiler, Television, The Bold and the Beautiful, The Young and the Restless 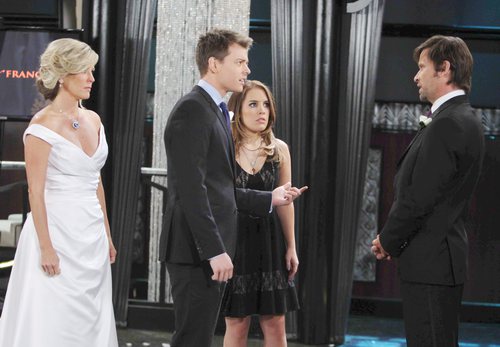 The Days of our lives spoilers and spoilers for the other network daytime soaps usually address what will happen on upcoming shows but here we do something a bit different. 2014 is coming to a close, and it has been a wild year for the remaining daytime soap operas. After reporting all of The Young and the Restless, Days of Our Lives, General Hospital, and Bold and the Beautiful spoilers, rumors and news for the past twelve months – we are thoroughly exhausted. The Best and Worst soap opera moments of 2014 lists are popping up all over the internet, but we decided that instead of choosing our favorite scenes, we wanted to give our soap opera fan readers a chance to make the list themselves — by voting. Right before we kick off 2015, we will post a list of all of the results, hand-selected by our readers.

We kicked off our Best & Worst of 2014 poll with the “Best Death Scene,” and AJ Quartermaine’s demise seems to be the fan favorite so far. Today, we are going to move on to Best & Worst weddings of 2014 – and there were a lot of them. We sat down and determined which wedding scenes we thought should make the cut – and now it is up to you to vote for which soap opera pulled off the best wedding this year. So, without further ado, here are your candidates for “Best Wedding” of 2014.

Sonny & Will (Days Of Our Lives): When Days of Our Lives spoilers teased that Sonny and Will’s wedding would be a huge event – we totally underestimated just how huge it really would be and had no idea we would be watching it for a week straight. Although there was no major drama at the Salem couple’s “I Do” ceremony, the event gained a lot of attention just because there aren’t too many same sex weddings on soap operas these days.

Bill & Brooke (Bold and the Beautiful): Bill and Brooke’s Abu Dhabi wedding kicked off nearly picturesque. There was sands, beaches, and a flowing white gown – and then Ridge Forrester landed a helicopter right in the middle of it. Bill and Brooke never did wind up getting married, but the day did end in Ridge Forrester being dumped from a helicopter in to the Persian Gulf and missing for about a week, so it is definitely worth mentioning.

Carly & Franco (General Hospital): General Hospital spoilers teased there would be a Halloween wedding in Port Charles, and we knew it would be epic. The week long extravaganza exposed not one but two murderers, and sent Sonny Corinthos and Ava Jerome to prison. Not to mention it also caused Michael to cut off his parents and change his last name to Quartermaine, and brought back crazy Heather Webber. There may not have actually been any vows exchanged but it sure was one hell of a wedding.

Nick & Sharon (The Young and the Restless): Nick and Sharon Newman made a valiant attempt to wed, but the long time couple was interrupted twice by Phyllis. If your heart didn’t skip a beat when Phyllis barged into the church, when she was supposed to be in a coma in Georgia, and collapsed on the floor in the middle of the ceremony – then you must be heartless. And, a week later, Nick and Sharon tried again to get hitched, but Phyllis once again intercepted and revealed that Sharon had switched Summer’s DNA test, which caused the wedding to be cancelled indefinitely.

EJ & Sami (Days Of Our Lives): DOOL spoilers teased that Sami Brady was marrying EJ – and fans were in an uproar, since EJ had just cheated on her with Abigail Deveraux. The ceremony was pretty cut and dry, until the end when it was revealed that Sami actually knew about EJ’s affair and was just scamming him. Once they were officially husband and wife…again, Sami promptly had her hubby thrown in jail and began taking over his company.

Wyatt & Hope (Bold and the Beautiful): When Bold and the beautiful spoilers revealed there would be a wedding in Paris, B&B fans were all certain that Hope and Liam would be tying the knot. However, a slew of unfortunate events, orchestrated by Quinn, resulted in Liam’s brother, Wyatt, standing in for him and marrying Hope instead. Now, that’s brotherly love! After a Parisian honeymoon the couple headed back home and it became pretty clear pretty quickly that Hope regretted her hasty nuptials.

Mariah & Ian (The Young And The Restless): Mariah and Ian’s wedding was by far the most disturbing of 2014, maybe not the best though. Y&R fans were totally creeped out when Mariah’s father figure, Ian, drugged her and put her in a wedding dress, and then had his slimy pal come marry them in a storage locker.

Levi & Maxie (General Hospital): Was there a GH fan out there that didn’t despise Levi? Although Levi and Maxie’s wedding scene was epic and eventful, and ended with a kidnapping, we hated Levi so much that we had a tough time enjoying the big day. On the bright side, it was the building blocks to our glorious Naxie (Nathan and Maxie), which almost made up for it all.

So soap fans, go ahead and vote for the “Best Wedding” of 2014 in the poll below.