The Bold and the Beautiful Spoilers: Will Hope and Wyatt’s Marriage Collapse When She Returns to Liam – Quinn Suffer’s Liam’s Wrath 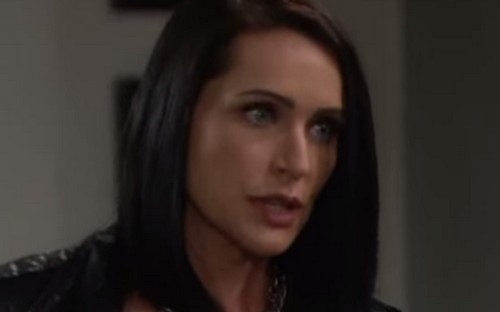 The Bold and the Beautiful spoilers reveal that the lives of our friends at Forrester Creations have officially been turned upside down by the video footage of Quinn pushing Ivy into the river in Paris. Quinn didn’t just nearly drown Ivy though, Ivy’s impromptu dip in the Seine River set in a motion a course of events that caused Hope to marry Wyatt instead of Liam. And, now that Quinn’s scheme has been exposed, Hope and Wyatt’s marriage could easily unravel right before our eyes.

A Bold and the Beautiful spoiler video for Wednesday September 17 teases that Liam shows Hope proof that Quinn is the reason he didn’t make it to the Eiffel Tower in time, and Liam offers a convincing argument as to why Hope should leave Wyatt and marry him instead. In the B&B spoiler video Liam explains to Hope, “We have a chance right now to prove to Quinn that no matter how hard she tries, she can’t keep us apart.”

Hope is apparently buying everything that Liam is selling, because in the same spoiler video she sneers to someone (presumably Quinn) that they are “just as sick as they ever were.” It really is interesting that Hope is second-guessing her decision to marry Wyatt, because in Paris she was clearly happy with the choice she made, it wasn’t until she came home and saw Liam flirting with Ivy that she began to think she made a mistake marrying Wyatt. At the end of the day, Hope can blame Quinn all she wants, but a part of clearly wanted to be with Wyatt or else she never would have said “I Do.” And, if you are that quick to marry another man, then you really have no business marrying either of them.

So B&B fans, do you think that Hope will divorce Wyatt so that she can be with Liam now that the video footage of Quinn in Paris has given her the out that she wanted? Do you think that if she chooses Liam now, she will then have second thoughts and think she should be with Wyatt? How much longer can this love triangle really go on? Let us know what you think in the comments below and don’t forget to check CDL tomorrow for more Bold and the Beautiful spoilers.

Fans at Soap Opera Spy feel strongly and not everyone is thrilled with this storyline:

These writers need to move on. Who cares which man Hope picks at this point. This plot has gone on for a year to long. It was refreshing to see Liam and Ivy.

How much longer will the viewers have to suffer through the Hope/Liam thing? Please move on. Maybe kill off one of them so it will finally be over.

I’m so sick of this same old story line. Evey episode is based on Hope. She is NOT all THAT!! Let Liam be with Ivy and keep it moving

Liam needs to move because Hope do not want to be with him she just want to keep him in the back closet.

Quinn needs to go to jail for what she has done. I’m so sick of Hope, she’s disgusting.

I am so tired of Loam running after Hope. Gtow u[ and move on. Quinn needs a slap upside her head.

At this point I don’t care anymore! They’ve run this storyline into the ground!

Hope is going to stay with Wyatt for security.

Quinn is certifible! Get rid of the b***h now!

Don’t worry Bolds fans, spoilers indicate they will be on the Deacon-Brooke-Bill love triangle next!