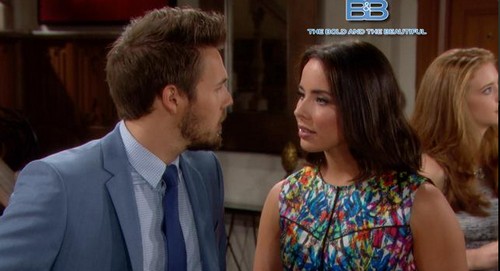 The Bold and the Beautiful spoilers reveal that B&B fans will not want to miss a single episode of the CBS soap opera during the week of September 15-19. Thanks to Pam and Charlie, Liam now has video evidence that Quinn pushed Ivy in to the river in Paris, and is the reason that Hope married Wyatt instead of him. So, according to Bold and the Beautiful spoilers, all hell is about to break loose during the week of September 15 as news of what happened in Paris makes its rounds.

Bold and the Beautiful spoilers reveal that Liam makes a beeline for Hope once he has the video of Quinn pushing Ivy, and Hope naturally realizes that it was not an act of fate that made Liam stand her up in Paris, but another one of Quinn’s well thought out schemes. Quinn has no choice but to confess to Wyatt, the same son she promised she was a changed woman to and wouldn’t meddle in his life anymore, that she did just that in Paris. While Wyatt tries to do some damage control and convince Hope that Quinn’s interference meant nothing, Liam makes it his mission to seek revenge on Quinn and plans to have her pay for her crimes.

According to Bold and the Beautiful spoilers, while everyone at Forrester Creations is in an uproar over the recent Paris revelations, Ridge and Caroline are oblivious to their surroundings and growing closer by the minute. During the week of September 15th, B&B fans can also expect to see Bill begin to feel threatened by Brooke’s relationship with Deacon as the pair grow closer over news of their daughter’s troubled love life, thanks to Quinn’s meddling.

So, B&B fans, now that the truth is out there and everyone knows Quinn is the reason that Hope married Wyatt, what do you think the fall out will be? Will Wyatt be able to convince Hope that they are meant to be together, or will Hope wind up back in Liam’s arms before the week is up? Will Liam really report Quinn to authorities for pushing Ivy into the river; after all, he does have video proof? Let us know what you think in the comments below and don’t forget to check CDL tomorrow for more BB spoilers.