Days Of Our Lives Spoilers March 31 – April 4: Sonny and Will Get Married – Liam Ups The Ante On His Crazy Scheme 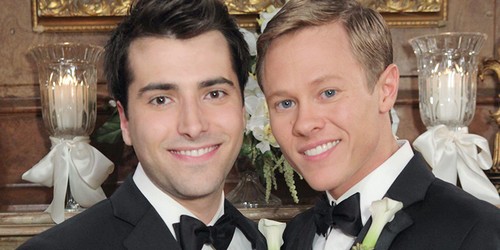 Lately it seems like pretty much every relationship on the popular NBC soap opera Days Of Our Lives is doomed. But this week DOOL fans will be treated to a three day long wedding extravaganza! Fan favorite couple Sonny and Will are scheduled to say their “I Do’s.” Here’s what Days of Our Lives fans can expect to see this week, March 31st – April 4th.

In a recent press release NBC teased about the upcoming nuptials, here’s what the network had to say, “Starting on April 1st for three consecutive episodes, the fan-favorite couple Will Horton and Sonny Kiriakis (affectionately deemed ‘WilSon’) will tie the knot in a beautiful ceremony presided by a surprise officiate.”

Not every Salem couple will be having as great of a week as Will and Sonny though. While Sonny and Will are pledging their love for each other, almost every other couple in town’s relationship is simultaneously crashing and burning.

No one really expected Brady and Theresa to last forever, a week was pretty impressive. And, the reality of how bad they are for each other will set in this week, March 31st – April 4th. Brady will begin to realize that he is substantially partying and harder when Theresa is around, and he literally can’t say no to her when she encourages him to party with her.

Also this week on Days of Our Lives, Liam ups the ante on his crazy scheme. He decides the quickest way to break up Jennifer and Dan is to make Dan look like a bad guy to Jenn. Dan and Jennifer aren’t the only ones on a fast track to a messy break-up, this week on DOOL Eric reveals to Nicole that not only is he not going to sleep with her, but he is never going to marry her either.

So Days of Our Lives fans, how excited are you to see Sonny and Will tie the knot this week. Do you think Liam will be able to break up Dan and Jennifer before this week is over? Or, will someone is Salem other than Theresa put two and two together and realize Liam isn’t playing with a full deck before his schemes become more dangerous? Do you think Theresa and Brady should go their separate ways, or were they just starting to grow on you as a couple? Share your thoughts in the comment section below and don’t forget to check CDL tomorrow for more Days of Our Lives spoilers.