Days of Our Lives Spoilers: Sami Is Suspicious of Abigail – Will Sami Catch EJ Taking Her For a Pregnancy Test 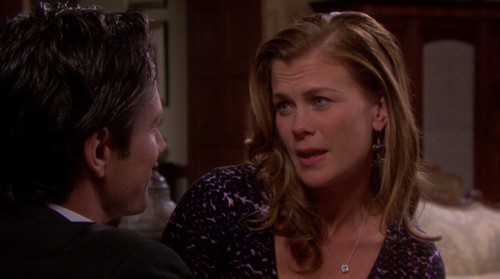 The latest episode of Days of Our Lives has set up a very interesting love triangle between Sami, Abigail, and EJ. For a quick recap, Sami and Abigail started hanging out last week after Sami requested art lessons from Abigail to impress EJ. Abigail agreed, but during the lesson, Abigail started feeling unwell and threw up a couple of times. Sami kept asking Abigail what was wrong, and she eventually came to the realization that Abigail must be pregnant. Dun dun dun!

Sami later tells EJ that Abigail must be pregnant, and that obviously causes EJ to freak out. Sami has no idea that EJ and Abigail slept together and have a history, so she doesn’t understand why EJ looks like he’s about to faint, and she’s even more suspicious when he starts firing a bunch of questions about Abigail’s pregnancy. She starts to second guess EJ’s motives in asking all these questions, but she tells herself that it’s only because he’s concerned about the baby. She convinces herself the baby daddy is probably Abigail’s ex-boyfriend, Chad.

Later, Abigail is having coffee with Will, and Will asks Abigail to stand for him and his gay lover during their wedding. However, Abigail vehemently says no despite the fact that they are very close, and she explains that it’s because she’s not feeling very well. Although she backtracks and agrees to do it later, it definitely raises Will’s suspicions.

Will later goes to Sami and tells her about Abigail’s odd behavior. Sami is now starting to put two and two together, and thinks back on Abigail’s behavior as well as EJ’s reaction to the news. She still has no idea what’s going on, but she’s starting to get suspicious.

At the same time, EJ goes to see Abigail and gets upset at her for telling Sami that she might be pregnant. However, he tells her that he’ll support her if she is pregnant, and they both head to his doctor to find out the truth.

However, with all this going on behind Sami’s back, it’s only a matter of time before Sami realizes the truth, isn’t it? And if EJ really is planning on supporting Abigail’s baby, then he’ll have to tell Sami, especially since they’re going to get married. But will Sami be ok with that? Or will EJ find a way to cover it all up?