The Young and the Restless Spoilers: Mariah Married To Ian – Rescued But Too Late – Phyllis Opens Her Eyes 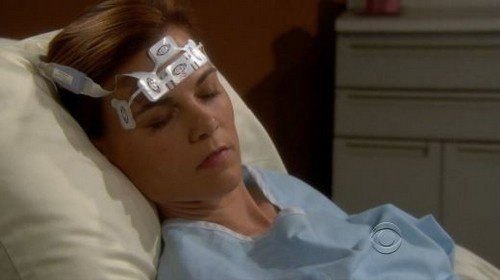 The Young and the Restless spoilers for Friday August 29 tease an episode of can’t miss drama. Ian Ward continues his reign of terror, earlier this week Genoa City’s resident sociopath kidnapped Sharon’s long lost daughter Mariah and drugged her and held her captive in a storage locker. According to The Young and the Restless spoilers on August 29th Ian’s friend Clarence arrives at the storage locker to perform a wedding ceremony. A hazy and drugged Mariah says “I Do” and legally marries Ian.

According to Y&R spoilers, Nick Newman and Sharon learn the address of the storage unit where Ian is holding Mariah, and rush there to save the late Cassie Newman’s twin. They arrive at the locker and find Mariah and Clarence inside, unfortunately they are too late and Mariah is already legally married to Ian. And, Ian is nowhere to be found. Meanwhile back at the police station Paul is prepping Courtney to go undercover as Sharon and meet up with Ian Ward for the money drop.

On August 29 Y&R fans can expect a strange encounter between Abby Newman and Stitch Rayburn. When Abby bumps in to her ex Tyler, she decides to try and make him jealous by grabbing Stitch and kissing him right before Tyler’s eyes. Abby successfully gets under Tyler’s skin, but Stitch is not impressed and orders her to never do that again. According to The Young and the Restless spoilers, fans can also expect to see Victor Newman pay Phyllis a visit at the clinic. He tells a comatose Phyllis that he has come to talk to her about her secret…and she opens her eyes!

So Y&R fans, what do you think was the purpose of Ian marrying Mariah? Is he just a sick and twisted individual, or does he have a plan? And what about Phyllis, do you think that she will suffer any side effects from her coma? Will she actually remember the secret that Victor is referring to?