The Young and the Restless Spoilers: Michael Muhney Replaced – New Adam Newman Won’t Be Known or Shown For Three Months 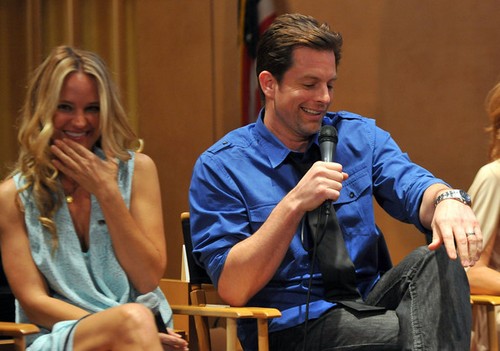 The Young and the Restless fans have been on the edge of their seats for weeks now waiting for the CBS soap opera to reveal which actor they have cast to replace Michael Muhney as Adam Newman. Although everyone in Genoa City thinks Adam Newman is dead, thirty second clips of the character’s hands have been appearing regularly on Y&R for over a month now, giving fans hope that it will be any day now that we see the rest of the character’s body, like his face.

If you are one of those Y&R fans that scour the internet every day in search of news pertaining to what actor has been cast to play Adam Newman, then you should probably just stop. According to The Young and the Restless spoilers in the latest edition of CBS Soaps In Depth, it is going to be months before Adam Newman shows his face in Genoa City.

Not only have TPTB not cast a Michael Muhney replacement yet, they haven’t even written the scenes revealing that Adam Newman in still alive. Soaps in Depth spoke to CBS exec Angelica McDaniel and she reported, “The summers almost all written, so basically we are in to the fall storylines now. You’re going to have to wait a little longer.”

Wait a little longer? The Young and the Restless fans have been waiting since literally January to learn the fate of the Adam Newman character and who would be replacing him. It has become clear, and Jill Farren Phelps even admitted it in an interview, TPTB are depending on the Adam Newman reveal to bring their soap back to life. But, considering the rapid pace the ratings are dropping, by fall The Young and the Restless may be too dead to resuscitate.

Are you as annoyed as we are that you have to wait until fall to find out who is playing Adam Newman? Do you think fans will grow bored with the soap opera and stop watching way before fall? Let us know what you think in the comments below and don’t forget to check CDL tomorrow for more The Young and the Restless spoilers.

Fans at Soap Opera Spy Facebook tend to really like Michael Muhney – here is some of what they had to say on his latest career news:

My guess is that they are waiting, hoping this will all “blow over” until they hire someone. I’ve got a feeling that every actor they’ve approached so far would not touch that role for the fear of fan backlash. And as big as the MM Army is, I really don’t blame them. JFP is the instigator in all this and deserves her walking papers!

i am so over who is going to be the next adam newman – i feel sorry for who ever gets the job because the loyal fans of michael muhney will not accept them in the role anyway – it will be a major hate fest going on because they will compare them with michael even down to the way the new actor blinks his eyes…………………..smh.

Well, since he is in New York right now for the next four days meeting with ABC executives, and he just said that he is getting ready to film a movie, I don’t see this as being good news for YR.

I hope Hunter King was worth it..bc from where I sit NOT!!!

Have you noticed how they seem to get along? So why is Hunter King the only chick saying she was groped? Normally, guys like that have a pattern & don’t stop w/one girl. No one else from the cast stepped forward. So what really happened??

JFP letting MM and others go, is the worst thing she could have done!! SMH!!!!

It certainly seems that MM carries a devoted fan base and we wish him the best of luck in his new movie. Still, we would love to see him on a daytime drama soon!