BY Amanda Austin on June 24, 2014 | Comments: 37 comments
Related : Days of Our Lives, General Hospital, Soap Opera, Spoiler, Television, The Bold and the Beautiful, The Young and the Restless 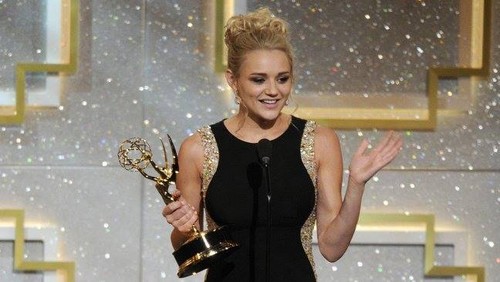 The Young and the Restless cast and crew are still celebrating their stellar night at the 2014 Daytime Emmy Awards, however one particular winner has Michael Muhney fans seething and conspiracy theories are running rampant on the internet.

For those of you who haven’t followed the never-ending saga, Michael Muhney was fired from The Young and the Restless by Jill Farren Phelps six months ago. After he was abruptly let go, TMZ posted a story claiming that the reason he was fired was because his co-star Hunter King (Summer Newman) complained to TPTB the Muhney had groped her on set. No one from Y&R ever cleared the air or confirmed or denied why Muhney was fired, so the story has spiraled out of control since then. Although, they never actually came out and said “the rumors are true Michael Muhney sexually harassed Hunter King,” a few of King’s co-stars took to social media and spoke out in support of her.

The majority of Michael Muhney fans believe that Hunter King was coaxed by Jill Farren Phelps to complain about Muhney so that she had an excuse to fire him. Although there really is no proof to that theory, King didn’t exactly help matters at the Daytime Emmy Awards Ceremony. The majority of soap fans were shocked when King won the Daytime Emmy Award for “Outstanding Young Actress” and beat out General Hospital’s Kristen Alderson (Kiki) – not to mention GH’s Brooklyn Rae Silzer (Emma) and B&B’s Ashlyn Pearce (Aly Forrester) who were not even nominated. Just the fact that Hunter won was enough for many soap viewers to believe that the Emmys were rigged since she is not highly regarded as an actress by fans. But, to add insult to injury Hunter thanked Jill Farren Phelps in her acceptance speech and even referred to her as her “second mother.”

So, King and Jill Farren Phelps are very close and that raises some concern regarding Michael Muhney’s firing and the sexual harassment scandal. Do you think that Hunter King deserved that Emmy, or do you believe the theory that the Emmy was her reward for helping oust Michael Muhney from The Young and the Restless? Or, do you believe that it was a total fluke that the girl who may or may not have single-handedly sabotaged Michael Muhney’s career happened to win a Daytime Emmy (that no one thought she would win) a few months later? Let us know what you think in the comment section below!