The Young and the Restless Casting Spoilers: Michael Muhney Won’t Be Back – New Adam Newman Implied by Eileen Davidson’s Return? 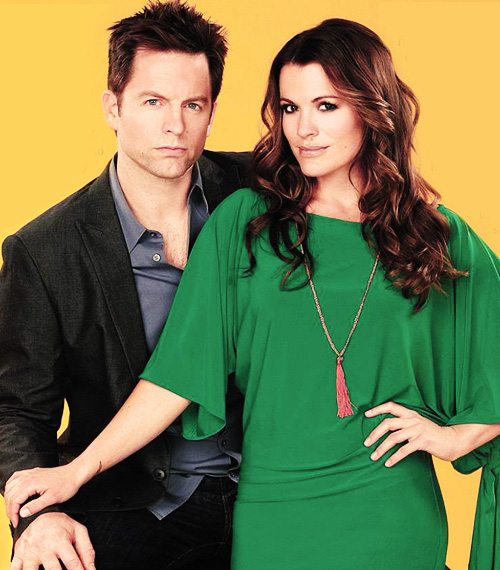 The Young and the Restless producer, and Y&R fans’ least favorite person, Jill Farren Phelps, is known to play favorites on the set of the CBS soap opera (cough, Steve Burton). So, it wasn’t exactly shocking news when it was announced that TPTB at The Young and the Restless had poached Eileen Davidson from Days of Our Lives and offered her a contract to return as Ashley Abbott, seeing as how Davidson has publically supported Phelps in the past.

Recently, rumors have emerged that Michael Muhney may be returning as Adam Newman on The Young and the Restless, nearly six months after he was scandalously fired and certain media outlets falsely accused him of some inappropriate behavior towards Hunter King. Muhney’s sudden reemerging on social media and cryptic tweets have given fans hope that there is some truth to the rumors that he was seen on the Y&R set and that this might indicate a return to the show.

Davidson tweeted, “2 u who r bashing @HunterHaleyKing. Shes amazing, brave & courageous. She deserves 2 b applauded & respected. THE END. I have so much respect for you Hunter. My thoughts are with you. Xoxoxox.”

Eileen Davidson is obviously on Jill Farren Phelps’ and Hunter King’s side when it comes to the Michael Muhney scandal. If she has signed on to The Young and the Restless full-time, there is no way she could effectively or willingly work alongside Michael Muhney.

What do you think about Eileen Davidson returning to The Young and the Restless? Do you still think there is a chance that Michael Muhney is returning after TPTB inked a full-time contract with Davidson, someone who obviously doesn’t want him on set? Furthermore, why would a talented actor like Michael want to return to a hostile working environment anyway? Let us know what you think in the comments below, and don’t forget to check CDL tomorrow for more The Young and the Restless spoilers.

Eileen Davidson PUBLICLY supported Hunter King in her alleged dispute with Michael Muhney – since it was announced that Eileen is returning to Y&R CDL maintains that this strongly implies MM is not. The logic seems sound. Here are some comments on this hot-button issue from the savvy fans at Soap Opera Spy Facebook page:

All these articles pertaining to Michael Muhney just repeat the same ole same. No one knows who is going to play Adam Newman. Even JFP doesn’t know. If she did, she would make the announcement. I do love this picture of Michael and Melissa. JFP was an idiot getting rid of MM. The only two couples on Y&R for the last decade that had electricfying chemistry together was Adam Newman and Sharon Newman (Played by Michael Muhney and Sharon Case) and Adam Newman and Chelsea Lawson Newman) Played by Michael Muhney and Melisa Clarie Egan. Just goes to show you he was and is one fantastic, talented, gorgeous man who had chemistry with whomever he had scenes with. Some of the best scenes he had was Adam Newman versus Victor Newman, Adam and Nick, Michael always gave 110% in all his scenes. It is true one actor does not make the show, but you have to admit Y&R fans tuned in to watch this man when he was on the t.v. screen. Now that he has gone, One and half million fans have tuned out and given up on the show. No Ashley Abbott will not bring those one and half million fans back to Y&R. That is just how ignorant JFP is. They better get rid of that woman Jill Farren Phelps before it is to late for Y&R. Y&R is the sinking Titantic and Jill Farren Phelps is the iceberg.

Eileen should have stayed with Days, Kristen is the more complex character who can showcase her talent, Ashley is just boring. I haven’t watch Y&R since Michael left and don’t plan to unless he returns.

Bad news. MM is irreplaceable. I want him back!! Who cares what Eileen Davidson thinks. I am very disappointed!

I don’t believe that MM ever did anything to Hunter. I’ve worked in sexual addiction and everything points to he didn’t do it. People don’t start behavior like that out of the blue. I believe that Hunter is definitely lying for her own means. She ‘s a terrible actress & now they can’t fire her & she knows it Hopefully no one will touch her with a ten foot pole after this. That would be sweet justice. Ultimately she’s the reason this show is now going under and in Hollywood that won’t be good for her

Wow, what a huge disappointment. The only person I’m remotely interested in is Chelsea and that’s because I was waiting for Adam (played by MICHEAL MUHNEY) to return.

Some people think the past should be forgotten – well CDL can’t ignore the past on this issue since MM and Adam Newman are currently very important soap opera topics. We will be bringing you more on the evolution of Michael’s soap career shortly. Fans really want to see him on a show soon!