The Young and the Restless Spoilers: Michael Muhney Fan Attacked By Eric Braeden – Called “Ass” and “Idiot” on Twitter 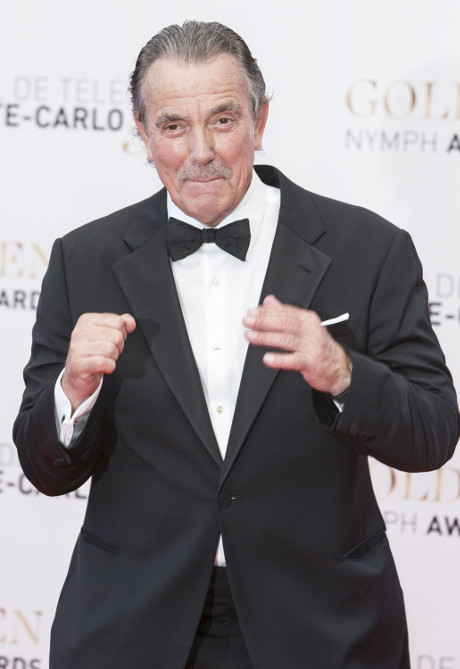 The Young and the Restless fans are still in an uproar over some social media drama that occurred at the end of last week. Iconic Y&R actor Eric Braeden (Victor Newman) referred to a fan as an “idiot” on Twitter, which launched the soap opera websites into a frenzy, and once again ripped the Band-Aid off the never-ending Michael Muhney firing scandal.

More drama has occurred behind the scenes of the CBS soap opera The Young and the Restless over the last few months, than actually on camera (which coupled together explains the massive ratings drop). When it was revealed that Michael Muhney had been fired by TPTB at The Young and the Restless over allegations that he had groped his co-star Hunter King, a large percentage of Y&R fans believed that Eric Braeden was largely responsible for Muhney being sent packing. And, considering how Braeden conducts himself and the negative things he has to say about Muhney – their theory isn’t that far-fetched. It appears it is a sore subject for Braeden though.

On Friday May 9th on Twitter a fan tweeted Braeden, “how is @MichaelMuhney doing after you caused him to be fired?” The actor tweeted back, “you are totally uninformed, you idiot!” Throughout the weekend Eric received a lot of backlash for calling a Y&R fan an “idiot” on such a public platform, however the nauseatingly arrogant actor continued to spew off egotistical tweets.

Another Y&R fan tweeted: “SO CLASSY A MAN OF YOUR AGE CALLING A FAN AN IDIOT.. FINGER POINTING WILL GET YOU NOWHERE. P.S. VICTOR TURNED JERK.” And Braeden proceeded to bicker with her and tell her that her that he could care less what she thought. Braeden replied, “I couldn’t care less what you think!! Would never have called someone that if they hadn’t made an accusation 1st! get it strait.” What kind of an actor talks to his fans like that? And considering Y&R’s ratings as of late, none of the cast are in any position to be turning away the dwindling devoted fans they have left.

But wait – Saturday April 10 – Mr. Braeden came out with this brilliancy on Twitter:

Eric Braeden ‏@EBraeden · May 10
I respect my fans enormously BUT NOT PEOPLE WHO WANT TO INSULT! ARE YOU KIDDING ME?? I DON’T TAKE S..T!! GOT IT???

Seriously speaking – someone from CBS needs to reign this cowboy in.

The Michael Muhney scandal is messy and complicated, we’re not going to pretend we have all the facts or details – because there is so much more going on behind the scenes of Y&R than meets the eye. Michelle Stafford abandoning ship after a decade and signing on to Y&R’s nemesis soap General Hospital should be proof enough for everyone that there are some serious issues between the cast, crew, and producer Jill Farren Phelps.

However, it seems unrealistic to believe that Eric Braeden had absolutely nothing to do with Michael Muhney’s firing. Days after Muhney was fired Braeden gave an interview to Radar Online, and made it very clear he would not miss Michael Muhney, Braeden told the website, “Towards the end, Muhney and I did have our differences and had a shouting match, no question. During that shouting match, all kinds of things were said. I won’t go into detail about it. I don’t remember the specifics of who said what but what I do recall is that I was prompted to get into ‘fisticuffs’ with him because he wanted me off the show, if you want to know the truth. That is about as far as I will go. That is it. It was a campaign to get me off the show. It was Muhney who wanted to get me off the show and he expressed that to various people.”

So, according to Eric Braden, Michael Muhney was already campaigning to have him fired from Y&R. If this is the case, then why would Eric sit back and allow that to happen? He is just as egotistical and combative as his character Victor Newman, and it is impossible to believe that someone launched an attack on him and he didn’t fight back.

What do you think Y&R fans? Should TPTB at The Young and the Restless hold Eric Braden responsible for his rude and disrespectful behavior on Twitter? He has become a household name and iconic Y&R character, anything he does or says on social media reflects on the entire soap opera. Do you think that Braeden’s behind-the-scenes feud with Michael Muhney in any way impacted Muhney being fired? Let us know what you think in the comment section below!

The comments are pouring in on Soap Opera Spy on this Twitter war between Michael Muhney fans and Eric Braeden:

You are correct. He is an A**. CBS should make him stop using twitter. I don’t like how he comes across. He is as much of an a** as Victor.

TPTB must fire Eric Braeden. I won’t watch Y&R again until that happens. I hope others won’t support this behavior & will take steps to let them know. MM is better off away from them. He’s a great actor & will do well somewhere better.

Good sense and discretion are obviously foreign concepts to EB.

I don’t think the fan should be called an idiot to begin with. I don’t blame the fan for baiting the real idiot “Eric Braeden”. All this pussy footing around to not hurt the actors feelings is stupid. I no longer belong to any groups, I deleted all of them, they are getting so ridiculous and I have better things to do with my time. If MM does not know by now we support him then he is in trouble big time. I’m sure he would like for the entire thing to go away.

This has become exhausting! I can only imagine how MM feels.EB has the right to defend himself like anyone else, but his arrogance is ridiculous. I’m done with the show. My heart is gone-Michael Muhney.

On Friday May 9th on Twitter a fan tweeted Braeden, “how is @MichaelMuhney doing after you caused him to be fired?” Now, who started this? The idiot fan was actually baiting EricB…..and he bit….with all he had…..I would expect nothing less from EricB…..

Eric Braeden is a bully and he should have been fired years ago when he hit Peter Bergman in the face. He needs to go to anger management class and he needs to retire from Y&R. He has outlived his usefulness on Y&R. I do not miss Y&R at all after I stopped watching on Jan. 30th. I just want what is best for Michael Muhney and Billy Miller. They are both so talented and they both deserve so much better than CBS Sony and Y&R had to offer. I hope to see Michael on Primetime or GH. I miss him so much. He was definitely the best actor to grace the daytime t.v. screen in a very long time. He is just way too talented to not be back on our t.v. screens or the big movie screen. Hurry back to your fans Michael and let ole Victor Newman go pound sand.

I’m done with the show. I’m tired of the dumb storylines, it’s always the same.

I’m shocked! Idk how many times I’ve read some really nasty things said about and to soap stars, and because one (Eric) dishes it out right back to the “idiot”, everyone is pissed at him (Eric)?!?! Talk about double standards!!!! Lmbo

I don’t think my interpretation of the consensus here is needed! Eric is truly one of kind – isn’t he! 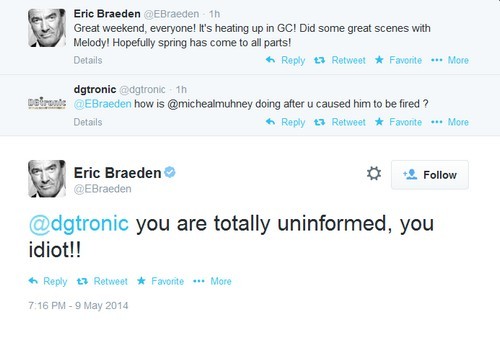 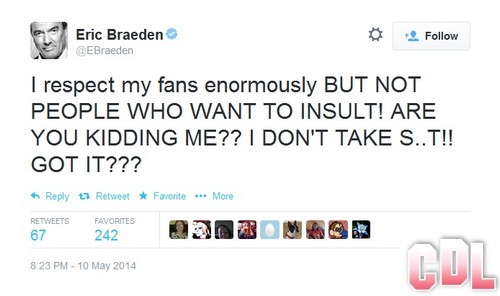