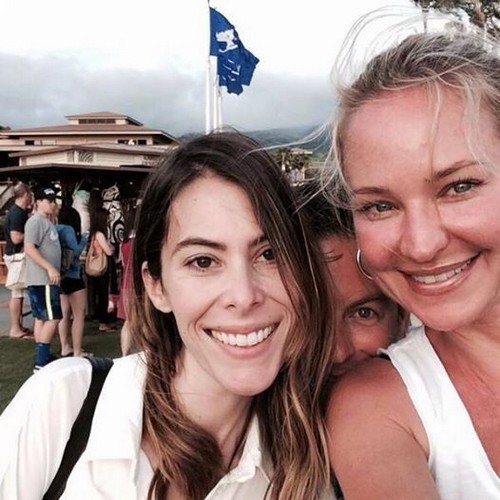 After Michael Muhney’s scandalous firing at The Young and the Restless, his co-stars had nothing nice to say about him and followed Jill Farren Phelps like blind sheep. A handful of Y&R cast members even spoke out publicly against Muhney after he was let go, like Kristoff St. John and Eileen Davidson. It turns out Michael Muhney does still have one friend left at The Young and the Restless, actress Sharon Case.

Muhney posted a photo on Twitter on July 7th of his wife, and onscreen ex-wife Sharon Case posing together in Maui, and he captioned it “somebody joined my wife and kids for dinner in Maui tonight.” Sharon Case also posted a photo of her posing with Muhney’s daughter Ella at dinner and posted it to her Twitter account. Case is the first member of the Y&R cast to publicly hang out with Muhney after he left the CBS soap opera, and considering she blasted it all over Twitter, she isn’t afraid to let the world know that she supports Michael. 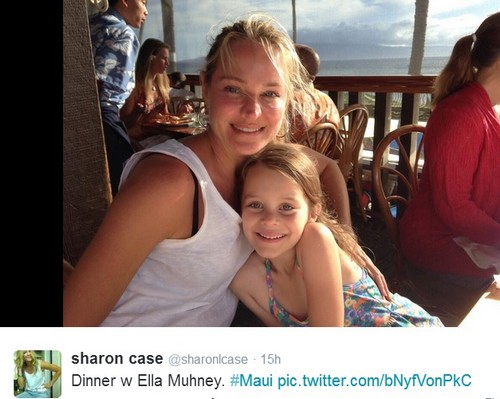 Of course, the fact that Michael and his ex-costar Sharon Case ran into each other while they were both on vacation in Maui has spurred a slew of rumors that Michael Muhney is back on the set of The Young and the Restless and playing Adam Newman. The bottom line is, the odds of Michael Muhney returning to Y&R after all of the drama and allegations are literally one out of a thousand. And, for those of you who are convinced those are Muhney’s hands we keep seeing during Adam Newman’s scenes, Muhney’s own Mom took to Twitter and confirmed those are not MM’s hands.

What do you think about Sharon Case hanging out with her ex-onscreen hubby Michael Muhney? Does this mean that Sharon Case doesn’t like Jill Farren Phelps? Let us know what you think in the comments below, and don’t forget to check CDL for all of you’re The Young and the Restless spoilers and gossip.

On another note there hasn’t been any recent real news about MM joining General Hospital. Rumors that AJ Quartermaine was coming back to life played by Michael Muhney have not been substantiated nor has any other GH role been seriously suggested. While it’s true that Michelle Stafford has joined GH as Nina Clay and Billy Miller has been tipped to play a returning Jason Morgan, the same can’t be said so far about Muhney. Of course the TPTB at General Hospital would be wise to hire a fan-favorite like MM but we here at CDL don’t get to tell them what to do!

Fans at Soap Opera Spy have opinions on MM and all related issues:

That’s Jaime Muhney with Sharon Case and Michael Muhney between them  Maybe there’s a chance he WILL be coming back to Y&R??? *crossing my fingers*

ummmm MM is actually in hawaii, so that’s not photoshop Lol

Love it, Love it Love it. Michael with two of his beautiful girls. He and Sharon Case and Jaime have always been friends. So glad they have had fun in Maui. Hope when he gets back home he will show up on our TV screens once again. I have never ever before missed anyone before like I have Michael Muhney. He needs to come back.

This is so nice to see, I agree. In fact, this makes me love Sharon Case even more. She is a beautiful woman and she can make up her own mind regardless of what other people think. She isn’t swayed by peoples hatred and bitterness toward MM. On Sharon’s twitter, there is a beautiful picture of her with the Muhney’s daughter, Ella. Bravo Sharon Case, this made me very happy.

I love Sharon! So want her an Nick to stay together ! I guess we will see who Adam will be this month cause him an Phyllis is suppose to return!!!

none the less MM and SC have ALWAYS been close friends… don’t you remember out of all the Y&R casy SC was the only one to do a “farewell” video??? Where as when BM left the” entire cast “made and spoke in one for him.. PLUS set crew !

He was spotted at Y&R studio afew weeks ago,so its possible he may of been negotiating a return to Y&R,because he sure wasn’t there to have a coffee,and its only been showing this guys hand on the show,cos’ maybe they haven’t hired anyone yet.

The fans love Michael Muhney and they deserve to have him as a regular on a soap soon.