BY Amanda Austin on May 21, 2014 | Comments: 7 comments
Related : Soap Opera, Spoiler, Television, The Young and the Restless 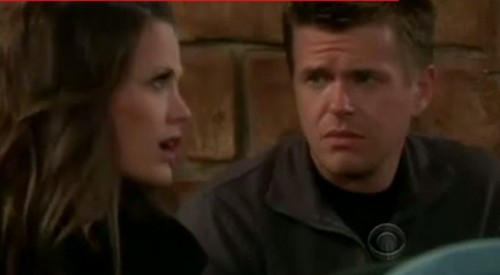 There is no denying that there is some chemistry developing again between The Young and the Restless characters Chelsea and Billy. Considering they were at one point in a relationship, and they are now both newly single, it shouldn’t come as much of a surprise to Y&R viewers. The Young and the Restless spoilers tease that Billy and Chelsea will be spending a lot of time together during the week of May 19th when they work together to stage an intervention for Chloe.

Chelsea and Billy actually have a lot more in common than their newly single statuses though. Chelsea is currently mourning the death of her husband Adam Newman. And, Adam Newman is the driver that allegedly killed Billy’s daughter Delia in a hit-and-run accident. Unbeknownst to Chelsea, Billy actually tried to shoot and kill Adam before he supposedly died in the car accident.

Viewers recently learned that Adam Newman is very much alive and he took the necessary steps to fake his own death. During his memorial service Adam hired someone to pose as a mold inspector and go into Chelsea’s home and set up hidden cameras so that he can watch his wife and son Connor from afar.

TPTB at The Young and the Restless are setting up a potentially insane storyline between the hidden cameras and Billy and Chelsea’s newfound closeness. Billy and Chelsea have no idea Adam is alive, or watching everything that goes on inside Chelsea’s house. How nuts would it be if Billy and Chelsea share another kiss or actually hook up during a passionate moment and Adam watches it all go down on his hidden cameras? If there is anything that would bring Adam Newman out of hiding it would be watching the man that tried to shoot him hooking up with his wife! Then, Y&R fans would finally get to see what actor Jill Farren Phelps has chosen to replace fan favorite Michael Muhney.

What do you think Y&R fans? Is there a chance that Billy and Chelsea could reconnect and Adam Newman will watch it all go down via his hidden spy cameras? Let us know what you think in the comments below, and don’t forget to check CDL tomorrow for more The Young and the Restless spoilers and speculation.