The Young and the Restless Spoilers: Billy and Chelsea Stage Intervention For Chloe – Mariah’s Big Secret – Victor and Dylan vs Ian Ward

BY Amanda Austin on May 17, 2014 | Comments: 12 comments
Related : Soap Opera, Spoiler, Television, The Young and the Restless 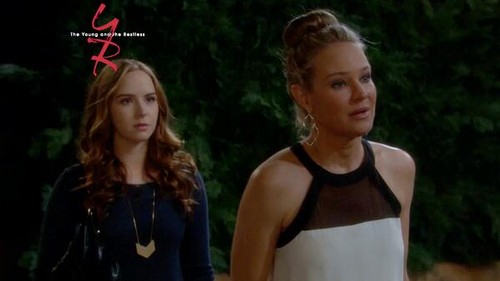 There are several slow-burning storylines developing on The Young and the Restless, and Y&R spoilers tease that during the week of May 19-23 some of those storylines will finally come to an end, or at least provide some sort of solution or explanation.

When Fake Ghost Cassie arrived in Genoa City, everyone was so concerned about the fact that Victor Newman had hired her and she was Tyler’s ex-girlfriend, that no one questioned the obvious-why was she a dead-ringer for Cassie Newman. On the May 16th episode of The Young and the Restless Sharon paid Mariah/Fake Cassie a visit and questioned her about her family and hinted that she thought she might be related to the Newman Family. Mariah denied it, however after Sharon left she began panicking and raced over to Sharon and Nick’s house and informed them she had something important to tell them. According to The Young and the Restless spoilers, we will find out what said important thing is on Monday May 19th, and hopefully she will shed some light on why she could pass as Cassie’s doppelganger.

We’ve been watching Chloe slowly spiral out of control since she kidnapped Chelsea’s son Connor. Since then she sabotaged Chelsea’s fashion show, tried to have sex with Billy while he was passed out so she could get pregnant, and now she is contemplating stealing a sample of his sperm from the hospital. The Young and the Restless spoilers for the week of May 19th tease that Chelsea and Billy join forces and stage an intervention for Chloe, and they invite Kevin, Michael, and Lauren.

Meanwhile, Stitch will spend the week May 19th stressing over the recent realization that Victoria is pregnant. Y&R spoilers tease that Dylan encourages Stitch to give Victoria the space that she needs and by the end of the week Victoria finally deals with her pregnancy heads on and makes a decision about whether or not she should tell Billy. The Young and the Restless spoilers also tease that Dylan will join forces with Victor Newman to take care of their mutual enemy Ian Ward.

What do you think Mariah’s big news is for Nick and Sharon? Could our theories be correct that she is Cassie Newman, or somehow related to Cassie Newman? And, what about Victoria’s pregnancy? How do you think Billy will take the news when he learns there is a 50% chance that Stitch is the father of his estranged wife’s baby? Let us know what you think in the comments below and don’t forget to check CDL tomorrow for more The Young and the Restless spoilers.

There is a fan at Soap Opera Spy who thinks that Maria is the late Cassie’s twin:

Mariah’s identity is likely to be cleared up to some extent once her big secret is revealed this week.