The Young and the Restless Spoilers: Billy Blames Adam Newman For His Ruined Marriage To Pregnant Victoria – Is It Stitch’s Baby?

BY Amanda Austin on May 7, 2014 | Comments: 8 comments
Related : General Hospital, Soap Opera, Spoiler, Television, The Young and the Restless 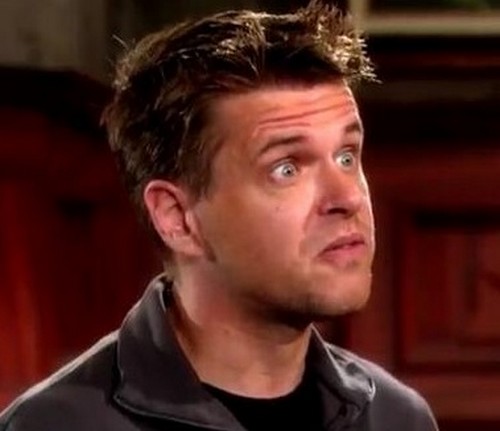 The Young and the Restless fans have been watching the Adam Newman storyline drag on agonizingly slowly. A scandal erupted on the set of The Young and the Restless and the character that played Newman, Michael Muhney was fired. The last time Adam Newman graced our television screens was in December when he and Billy Abbott were in a car accident, and he faked his own death. Since the accident his friends, family, and enemies have all come to the conclusion that Newman is dead, however fans at home know that is not the case. We have seen Newman in a few brief scenes, however his face has not been shown yet. TPTB still haven’t announced who will be playing the part of Adam Newman when he returns to Genoa City.

With May Sweeps upon us, Y&R fans know that there will be some explosive revelations on the popular soap opera very soon, to boost ratings. This week on The Young and the Restless Chelsea and Victor will begin planning Adam Newman’s funeral, and Y&R fans are speculating that Adam will show up at the memorial during May Sweeps and shock everyone by revealing he isn’t dead. And, well will finally get to see what actor has been selected to play the part and replace Michael Muhney!

According to The Young and the Restless spoilers on the May 7th episode from CDL’s exclusive source, Billy Abbott and Adam’s wife Chelsea will have a disturbing conversation. Billy already attempted to kill Adam Newman once, when he learned Adam killed his daughter Delia in a hit and run accident. Now, Billy not only blames Adam for his daughter’s death, he blames him for the demise of his marriage with Victoria as well. Billy announces to Chelsea that it is Adam’s fault his marriage is over, because if he hadn’t killed Delia, Billy never would have been so depressed that he cheated on Victoria with Kelly. If Adam Newman does pop up in Genoa City for his own memorial, there is a chance that Billy Abbott will try to take him out again!

Some Michael Muhney fans are holding on to hope that when Adam Newman waltzes back into Genoa City, it will be Muhney playing the part again, but the odds of that happening are slim to none. There are some rumors floating around the internet that Michael Muhney may be following in his ex-costar Michelle Strafford’s footsteps and heading over to ABC’s General Hospital. Ironically Michael Muhney reemerged on Twitter for the first time last week since January and began interacting with his fans again. Some people believe that the reason Muhney came out of hiding is because he is preparing to announce his new part on General Hospital as Jason Morgan.

On April 28th Michael Muhney tweeted, “Lotta good people in this world. I’m thankful each and every day for the overwhelming love.” And then on May 5th Muhney share an adorable photo of one of his kids and commented, “Feel like smiling? A huge smile? Watch this video I just made and you’ll be grinning ear to ear.”

So do you think Adam Newman will show up at his own memorial and shock everyone in Genoa City by revealing he is actually alive? And, what do you think about Billy Abbott blaming Adam Newman for his marriage woes? He is a grown man, he shouldn’t be blaming anyone for cheating on his wife but himself. Do you think Michael Muhney will head to General Hospital like Michelle Strafford did? Let us know what you think in the comment section below and don’t forget to check CDL tomorrow for more The Young and the Restless spoilers.

Comments on Billy, Michael Muhney and the new Adam have popped in over at Soap Opera Spy:

okay – i KNOW they have a better photo of david tom – he looks like a total psycho in this pic……………….smh

The new billy looks horrible. Glad I am done watching

He’s almost as over dramatic as Paul.

Great pic…represents the true spaz that he is!

I have learned to watch Days and it’s pretty good

The issue of Billy and his relationship with Adam is bound to lead to further complications in the storyline once Michael Muhney’s replacement appears in Genoa City, possibly at his own memorial!

And here is more on the issues discussed above:

One of the worst ever, he can never ever replace Billy Miller,,,,, but I think most anyone would be better than David Tom in this role

His facial expressions get odder and odder

My eyes! My eyes!!! In all seriousness, thanks for the laugh.

I wish they would find the REAL person who did this already & get on with it!

This guy is the worse actor I ever saw, I use to think no one could be worse than Dylan but changed my mind when I use this psycho, honestly, both of them need to find another job

It truly doesn’t seem like fans are that happy with David Tom as a replacement for Billy Miller – just wait until the new Adam Newman shows up!