The Young and the Restless: When Adam Newman Returns Will He Find Chelsea and Billy Together? 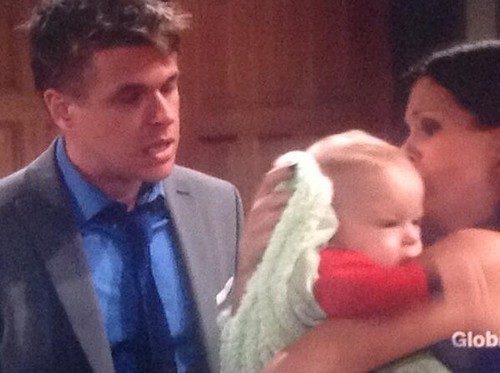 On The Young and the Restless the residents of Genoa City’s lives are all intertwined and linked together under interesting circumstances. Chelsea and Billy may just have the most interesting history and dynamics yet on the popular CBS daytime drama. Billy Abbott was the first Genoa City resident that Chelsea hooked up with, after accusing him of rape and retracting accusations, Chelsea gave birth to his son and then handed the baby over to Billy and his wife Victoria to raise. Then Chelsea proceeded to begin a relationship with Adam Newman, her baby-daddy’s brother in law. After a tumultuous marriage Chelsea gave birth to Adam Newman’s son Connor. Then Chelsea’s husband Adam allegedly ran over her first baby-daddy Billy’s daughter Delia and killed her.

Now, Chelsea and Billy have both found themselves single again. Billy’s marriage with Victoria was destroyed when he cheated on her with a woman he met at a grief group, because he was so distraught over his daughter’s death. Chelsea is under the impression she is a widow and is still coping with the thought of her husband Adam killing her baby-daddy Billy’s daughter. While Billy and Chelsea are both trying to make sense of their marriages ending and death of their loved ones (Delia and Adam), it makes sense that they find some comfort in each other.

Is there a Chelsea and Billy reconciliation in the near future? It wouldn’t be completely out of context, they have a history together, they are both grieving the loss of a loved one, and they both are technically single again. The thing is we all know Adam Newman is alive, even though Chelsea isn’t aware of it. It’s only a matter of time until Adam Newman returns to Genoa City and imagine how insane it will be when he realizes that his wife is hooking up with the man that held a gun to his head and tried to kill him?

Of course this brings up another point not directly related to the storyline but certainly close to fans’ hearts and minds. Michael Muhney! Who is replacing MM as Adam Newman?

So, Y&R fans, do you think that the writers will pair together Chelsea and Adam in the near future? Would you like to see them together or does the thought of it make you cringe? Let us know what you think in the comment section below, and don’t forget to check CDL tomorrow for more The Young and the Restless spoilers and speculation.

Meanwhile comments on Soap Opera Spy help clarify the situation between Billy and Chelsea as well as address Adam’s return:

the baby was sick. he brought them to the hospital .. drove them home. Billy still want Victoria. Victoria does not want Stitch.. Chelsea would be more than happy to see Adam come through that door.. Personally, I would love to see the look on Billy’s face. I still say he knows something more

I think Billy is frightened. Remember there was a gun shot in the car before it crashed so perhaps he shot Adam and he is frightened people will find out

Will have to give it up or fast forward new Adam. Still very angry about that.