The Young and the Restless Spoilers: Adam Newman Is Innocent – Did Stitch or Kelly Kill Delia? 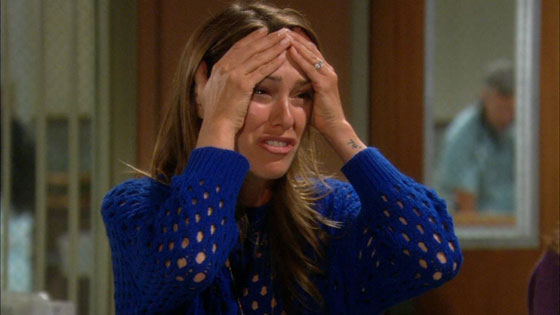 Any Young and the Restless fan will tell you that not everything is the way it seems on the popular daytime soap opera. Adam Newman was painted as the hit and run driver that murdered Billy and Chloe’s daughter Delia months ago, but Y&R fans aren’t buying it, and for good reason.

Adam doesn’t actually remember hitting Delia. He was driving down the dark road the night that she was killed, and swerved to miss her puppy. He climbed out of his car to make sure he didn’t hit the dog, and found Delia’s hat lying in the middle of the road. The scarf that was attached to Delia’s hat was found stuck in Adam’s tire and later it was discovered that Adam’s passenger side light was chipped. Adam became convinced that he ran over Delia, and later even confessed to the crime. As far as Y&R fans are concerned, there is not enough evidence to confirm Adam is the hit and run driver. If Adam killed Delia, there should have been a lot more damage to his car, the FRONT of his car. A busted side-light doesn’t usually occur during a hit and run, unless the driver is flying down the road in reverse. Delia’s hat was lying in the road, Adam could have easily ran over the hat and got the scarf wrapped around his tire.

Kelly and Stitch are both relatively new characters on The Young and the Restless. They appear to have a secret past together, and a strange relationship. Kelly is hinting that Stitch did something horrible and unforgivable, but it still hasn’t been revealed what exactly it is that he did.

A very popular theory floating around right now is that Kelly is actually the driver that ran down Delia and left her for dead. The night that Adam allegedly ran over Delia, a woman sped down the very same road around the same time of her death, although she was only shown for a moment, she did resemble Kelly. Also, when a list of drivers with black SUV’s was flashed, showing that Adam was a suspect, there was a black SUV owner on the list named “Kelly Andrews.” (Kelly could have easily used an alias when she came to Genoa City and her real name may be Kelly Andrews.) Also, this would explain Kelly’s obsession with Billy, Delia’s father. Although Billy has tried to let her down easily after their “grief sex,” Kelly is determined to remain friends with him, if not more. Stitch is a doctor, and very close to Kelly. He may have helped her cover up her crime the night that Delia was killed, or Kelly could have even called Stitch and had him come try to revive Delia after she realized she ran her over.

So Y&R fans, do you believe that Adam Newman really killed Delia, or is the evidence insufficient? Do you think Michael Muhney got the blame so it would be easier to fire him? Do you believe the theories that Kelly killed Delia, and maybe even Stitch helped her cover up her crime? Share your thoughts and theories in the comment section below, and don’t forget to check CDL tomorrow for more The Young and the Restless spoilers.