The Young and the Restless Spoilers: Cassie’s ‘Ghost’ Photographed By Nick – Who is She? – Victor Attacked By Nikki and Nick 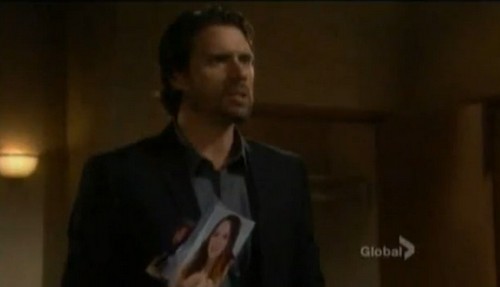 On The Young and the Restless Victor Newman always seems to have a trick up his sleeve, but according to spoilers that have been leaked one of his most recent schemes is about to blow up in his face. And, one of the most-talked about mysteries on the popular daytime soap opera is about to be solved. Tomorrow’s episode of Y&R is definitely a can’t miss episode!

Everyone in Genoa City is preparing to attend Tyler and Abby’s engagement party, unfortunately Nick and Sharon forgot the happy couple’s gift. When Nick heads back outside to the car he gets the shock of a lifetime. He catches a woman watching his family through the window with her back to him. He calls out to her and she turns around… it’s “Fake Ghost Cassie” that Victor hired to find out Sharon’s secret and drive a wedge between her and Nick.

For the past couple months Nick has catered to Sharon and thought she was legitimately losing her mind because she kept claiming she had saw Cassie’s ghost. Now that Nick is seeing Cassie he will realize that Sharon wasn’t crazy, and she got electroshock therapy for nothing. If Fake Cassie speaks to Nick and reveals that his Dad Victor hired her, then all hell is going to break loose. Victor thought Nick hated him before…wait until Nick finds out that his own father hired a girl to impersonate his dead daughter.

Fans of Soap Opera Spy are just hoping Victor gets his just due for harming Sharon and being such a devious snake – on the other hand there is much negative sentiment towards Sharon and some fans think she need to accept blame for her deeds and for taking shock therapy.

PLEASE let Nick find out that The Moustache is behind all this!

it’s about time Victor paid for his behavior!

However people feel about Cassie’s Ghost being discovered they are really getting into this story arc:

This has been the most real excitement we’ve seen on the YR in a while.

Will this break up Victor’s marriage? Call me crazy, but I like Victor. He can always be counted on for evil drama.

I don’t think it will Nikki always forgives him

If she gives Victor up it certainly will

I can’t wait to watch next week.

Victor seems to have earned the ire of all fans who take the time to comment. He must be one of the least loved soap icons out there. From what we know Eric Braeden’s off-screen personality isn’t that different from the Newman patriarch on-screen. We reported that Eric was not a fan of Michael Muhney and was instrumental in getting him fired. No doubt Eric was envious of Michael’s talent and the two were allegedly involved in more than one on-set altercation. But despite Eric’s corny acting and ridiculous macho blustering we are stuck with him. At least we can hope that the Y&R storyline after Fake Cassie’s discovery will help put the blowhard in his place.  Nick and Nikki will demand it!

On the other hand some fans are crazy for Victor and see him as the centerpiece of Y&R and feel he “makes the show.” Personally I don’t see that and I find his acting hammy and predictable. There’s no accounting for taste….

The question is this as far as I’m concerned: can Nikki get it together and finally leave Victor for good, that overbearing trickster – what do fans think?

Nikki is stupid as a stone and weak as a willow. She’ll always forgive Victor…even if they ‘go on break’.

Perhaps it’s time for Nikki to really pull the plug and lead into a new story arc?

Since Nick Newman is finally coming face to face with Cassie’s fake ghost, perhaps viewers will finally learn who she is. It is too much of a coincidence that Victor found a girl that could pass as Cassie’s twin. Is she really her twin? That would be amazing!  Or did Victor pay a plastic surgeon to make her look like Cassie? Some YR fans have even speculated that it may actually be Cassie and somehow she survived the car accident and now she has amnesia. Other ideas include Tyler’s ex, Mariah. Who do you think the Fake Cassie is? Share your thoughts and theories in the comment section below and don’t forget to check CDL tomorrow for more The Young and the Restless spoilers.