The Young and the Restless Spoilers: New Adam Newman Actor Replacing Michael Muhney – Starts on Y&R in a Few Weeks 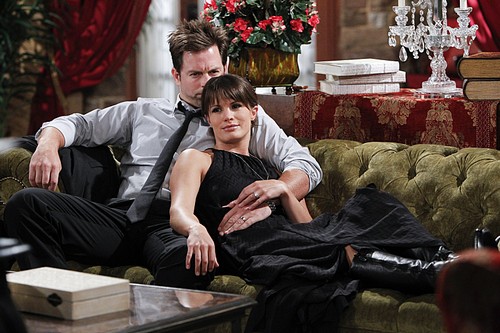 The Young and the Restless fans have been waiting impatiently for nearly a month now to see which actor will take on the role of Adam Newman and replace fan favorite Michael Muhney. At the beginning of this year it was announced that Jill Farren Phelps and the powers that be at The Young and the Restless had fired Muhney after he allegedly groped another cast member, Hunter King, behind the scenes of the daytime soap opera.

Coincidentally the last scene that Muhney appeared in was the car accident scene that Adam Newman allegedly died. This month his wife Chelsea enlisted the help of Victor Newman because she believed that Adam hadn’t actually died in the car accident. A body was located a few towns away from Genoa City and the dental records proved that it was indeed Adam Newman and he was officially deceased. Once the investigation was closed viewers learned that Newman had faked his own death and enlisted the help of an unknown man to pay off the doctor that completed the autopsy. However, the scenes of Adam Newman that were shot didn’t show his face, so Y&R fans have no idea who is playing the part of the iconic character.

It turns out the reason the new Adam Newman’s face hadn’t been revealed is because Jill Farren Phelps hasn’t actually chosen a replacement yet. But, according to sources close to the show, the new Adam Newman may be revealed in just a couple of weeks! A source close to the soap said that, “the soap is actively searching for an actor to succeed Michael Muhney in the role, and in early April contenders will be considered.”

So Y&R fans who do you think the actor will be that replaces Michael Muhney? Earlier this year the rumor mill was trying very hard to place Trevor St. John in the role, do you think there is any truth to that? Let us know who you think should replace Michael Muhney in the comment section below. And, don’t forget to check CDL tomorrow for more The Young and the Restless spoilers.

Here are some voices sharing their opinions on the whole Michael Muhney and Adam Newman issue from Soap Opera Spy:

No one is going to able to take Michael Muhney’s place as Adam. I can’t even believe they fired him in the first place. He was the best Adam ever.

Noone will EVER be as good as MM, bring him back!!!!

Dreading his replacement. I do find MM’s silence a little weird. Maybe we will get the shock of our lives & it will be him! A girl can hope right!

Without MM Adam Newman is DEAD to me. JFP will rue the day!

If when Adam comes back to the show, is not Michael Muhney, I’m done watching Y&R .

No one should play Adam except MM, who was fired for allegations with no proof. May not watch when he’s replaced. Many of us are still outraged at this Miss JFP! You are the one who should be replaced.

I agree with what you just said. It is unthinkable what has happened to this show though. They have successfully made a mockery of it.

What an outstanding show of support for Michael and what a resounding BOO for Jill Farren Phelps! Time will tell but from what we here it’s not going to be too much time before we see the new Adam Newman!

Fans of Y&R have more to say on the matter of Adam’s return and Michael Muhney’s replacement:

No one will every be able to replace Mike muhuney

OK, I loved the actor MM as much as anyone but if he did act inappropriately toward Summer, shouldn’t he have been fired? If he was innocent, wouldn’t he have sued for wrongful termination? I don’t want to believe he did anything but only he and Hunter King know the truth.

Is it a rumor, but I heard it was a male model from the Price is Right? ?

I suggest they check the Dankies Award Winner…

The new Billy is not a great actor and I can barely stand watching. It will be hard to accept a new Adam but lets face it they are going to do it. it is just a matter of time :(

One thing I can tell you for certain – the new Adam Newman is going to face an enormous uphill battle winning over fans. Perhaps the show is better not bringing him back and leaving him in the shadows?

And this very astute comment sort of sums up the general mood of fans:

How have people responded thus far to David Tom replacing Billy Miller? Not too well. As far as Michael Muhney is concerned, nobody will ever come close to playing the role like he did. He is an exceptional, unique talent which is obvious and was an issue for a group of actors currently on the show that can’t act. It’s a disgrace what has happened to this show. Until I hear that Michael Muhney has returned to the role of Adam Newman, I will remain a former viewer of this show who faithfully watched for over thirty years. They could bring in Trevor St John, Vin Diesel, the president, Mickey Mouse, etc, and it won’t matter. Nobody comes close to Michael Muhney’s stage presence.

Bring back Michael Muhney – listen up Y&R PTB – you’d be lucky to have him!