The Young and the Restless Spoilers: Adam Newman Returns Alive – Appears on Y&R – Is It Michael Muhney or a New Actor? 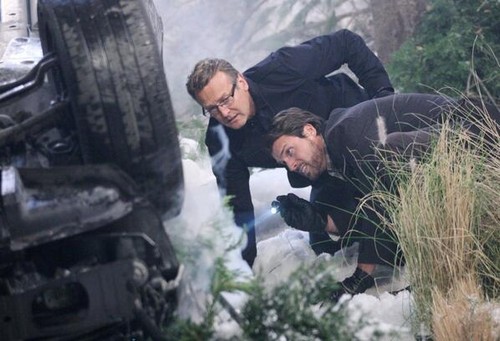 Y&R fans have been speculating for months now whether Adam Newman is dead or alive on The Young and the Restless. In January Newman was in an explosive car crash, and his remains were never recovered. Everyone in Genoa City assumed Adam Newman was dead, but his wife Chelsea refused to accept that he was dead. She even enlisted the help of her father-in-law Victor Newman to help her get information on Adam’s car accident, and see if there is any chance that he may be alive.

Recently on The Young and the Restless Victor was able to track down an eye-witness, the homeless man revealed to Victor that he had seen Adam climb out of the car before it exploded. His clothes were on fire and he was badly burned, and according to the homeless man Adam Newman said he was “going home.” Chelsea and Victor were nearly positive that Adam may actually be alive, but on Friday April 4th, they will receive some devastating news. On an all new episode of Y&R tomorrow, Victor and Chelsea will learn that a body has been found two towns away from Genoa City in the river. After an autopsy was conducted by a medical examiner, it is announced that it is Adam’s body and he is very much dead.

While Victor and Chelsea will have to begin the grieving process all over again after getting their hopes up, The Young and the Restless fans will get a treat. Tomorrow on Y&R it will be revealed at the end of the show that Adam Newman is actually alive, and we will see him up and talking for the first time since his car accident. Adam Newman will appear in a black hoodie with his back to the camera. So fans will not know who has taken over Michael Muhney’s role yet. It turns out an unknown character has been helping Adam Newman fake his own death. In the scene with Newman he, the unknown character, informs Adam that he has “paid off the coroner,” but insists that Victor can never know that he is helping him.

Who do you think is helping Adam fake his death, and why? He and Victor always had a bumpy relationship, but doesn’t he want his wife Chelsea to know that he is not dead? Could faking his death be linked to Delia’s death or Billy Abbott trying to kill him? Since Adam Newman is up and moving around, it is only a matter of time before his face is revealed. Who do you think Jill Farren Phelps has hired to replace Michael Muhney?

And here are some remarks from fans on Soap Opera Spy:

Lord please let it be the real Adam! If not I think I am done with Y&R! After so many years they all become family to us….its unfortunate that the new person in charge of dismanteling the show ” Who Will Remain Nameless” has not got the same loyalty and aloha for the show as we do. Couldn’t she assemble all of her “old cronies” in a new soap and leave Y&R alone?

Who cares who replaced Adam. I don’t support this who thing. No MM, no Adam. You can occasionally recast someone and it works but in this case. The people in charge of Y & R continue to make bad decisions. Case in point. Steve Burton, so loved as Jason on GH just doesn’t pull it off at all on Y & R. Bad script can kill the actor. Yet GH viewers desperately want him back as Jason. I don’t know how many would care if he left Y & R

So as we see fans remain unhappy with Jill Farren Phelps and believe on Michael Muhney can play Adam properly. Well we know Adam is alive and he is back. Jill better hurry up and hire someone to play him soon – we know it won’t be Michael Muhney. Share your thoughts and theories in the comment section below.