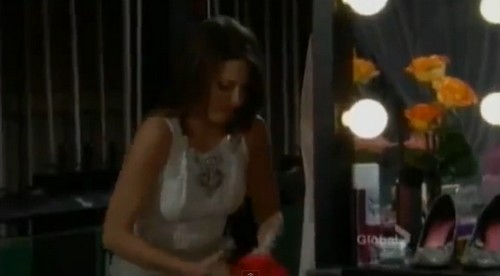 Chelsea’s dysfunctional fashion show may go down in history on the popular daytime soap opera The Young and the Restless. And, according to Y&R spoilers that have been released, Friday’s brawl between Chelsea and Chloe was just the beginning of the shenanigans at the Genoa City Athletic Club.

Next week April 14th-18th on The Young and the Restless, Chelsea’s fashion show will continue despite the no-holds-barred brawl between her and Chloe behind the scenes. But there will be big trouble from Chloe as we discuss below. On Monday the highly anticipated Bold and the Beautiful cross-over will occur when Forrester Creations’ power couple Rick and Caroline Forrester arrive to watch Chelsea’s show. All My Children’s alum Jill Larson will also stir up some drama as Connie Ross, Chelsea’s stage manager. Chloe must deal with the fallout from her crazy behavior, and Kevin will try to reason with her.

Chloe isn’t the only crazy person running around Genoa City next week on The Young and the Restless. Cult leader, con-man, and Dylan’s presumed biological father Ian Ward will return to Genoa City and shockingly no one is welcoming him with open arms. Victor Newman is determined to protect his family from the alleged rapist and Ian Ward isn’t easily intimidated. The two old men have equally inflated egos and are both incapable of not fighting dirty, so it is anyone’s guess who will win their power struggle.

What do you think the repercussions will be for Chloe after she got into a physical fight with Chelsea? Could she go to a mental hospital, or even jail? Elizabeth Hendrickson has already confirmed she is leaving Y&R, this would be the perfect opportunity to write her character out. At the fashion show Chloe really goes crazy – spoilers  on Soap Opera Spy reveal the following: Chelsea gets upset that the dress for the Finale of the fashion show is still in the garment bag, the dress is intended to be the highlight of the show – Chloe tells Chelsea to go handle another situation and she will deal with the dress because that’s what partners are for. But Chloe takes the dress out hangs it – picks up the scissors and starts cutting it to shreds!  If this doesn’t get Chloe into an asylum nothing will.

Fans have reacted to Chloe’s massive meltdown and Chelsea’s subsequent freak-out – Oh No ! Chelsea has gone to see the dress for the finale and all you  hear is her screaming, NOOOOOOOOOOOOOO! #SheIsGoingToStrangleChloe:

I’m a little sad Chloe is cray cray! I’ve enjoyed her character and will miss her if she does I fact leave.

Too bad, with The Foresters there. Although they are not strangers to crazy themselves. I hope Chloe is over for the show. Yeah!!!

Sad. Used to like Chloe and our hearts broke for her when delia died, and Chloe performed so well. But her recent behavior has turned me off her. The writers made her sooooo crazy that one can’t feel sorry for her anymore. I am truly glad she is leaving and I hope they do not recast – character gone !

#Duh just get her off the show & everyone will be happy. I hope Chelsea doesn’t leave

It’s so bizarre. She’s not rational at all.

Jill Farren Phelps gets rid of another actor, Elizabeth Hendrickson and it looks like she rigs the storyline to make the departing character leave under a cloud – in this case Chloe’s insanity!

Update: Today April 14th – Chelsea manages to salvage the dress but she is totaly and forever disgusted with Chloe – saying she thought she could trust her (why would she ever think that???) – even Kevin regrets ever marrying Chloe – her goose is cooked.

And, why do you think Ian Ward is back in Genoa City, what could he possibly want now? Share your thoughts and theories in the comment section below and don’t forget to check CDL tomorrow for more The Young and the Restless spoilers.