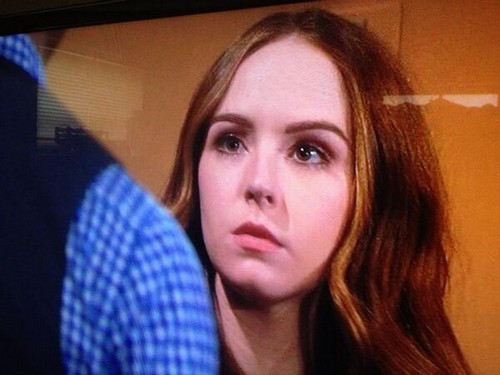 Some storylines on CBS’s soap opera The Young and the Restless have been dragging out for months, and it looks like they are all coming to a head just in time for May Sweeps. Last year on Y&R it was revealed that Abby Newman’s boyfriend Tyler has a secret past, and is hiding another woman from her. The coy Y&R writers have kept the other woman’s identity a secret…until now.

Since it was revealed that Fake Ghost Cassie was hired by Victor Newman to haunt Sharon and drive her mad, Y&R fans have been speculating that she may actually be Tyler’s long lost former girlfriend, to whom he was engaged, Mariah as well. The theory seemed far-fetched, and it was a hard sell for its supporters, but it turns out they were right all along. Tomorrow on The Young and the Restless Mariah’s identity will be revealed, and she is none other than the Fake Ghost Cassie that Victor Newman hired!

On Tuesday April 29th Tyler will prove his love for Abby by signing a paper stating he is not marrying her for her money. When Abby slips into her room and leaves Tyler in the hallway for a moment, Fake Ghost Cassie will approach him. In a shocking twist Tyler will demand, “What are you doing here Mariah?”

The Young and the Restless fans just learned that Ian Ward is actually working with Mariah, unbeknownst to Victor Newman. It appears that we have all underestimated Nikki’s tormenter Ian and he is much more conniving and calculating than any of us expected. He clearly arrived in Genoa City with an agenda, which seems to be slowly taking out every member of Nikki’s family.

First Ian went after her granddaughter Summer by posing as a Life Coach. He somehow planted double agent Mariah in the midst, and she managed to drive Sharon certifiably insane (well, more insane than she already was) and simultaneously turn Victor’s entire family against him.

Ian’s double agent Mariah is also in a position to destroy Abby Newman’s engagement with Tyler. One could assume Ian also has a slow-burning plan in place to take down his alleged son with Nikki, he has gotten inside Dylan’s head and left his entire estate to him in his will.

On a scale of 1-10 how shocked are you that Fake Ghost Cassie is Tyler’s ex-girlfriend Mariah? And, how insane is it that she is also working for Ian Ward? Let’s not forget we still have no idea why Mariah is a dead ringer for Cassie. Imagine the fall out if she destroys all of the Newman’s lives and then it is revealed she is actually related to them! Share your thoughts and theories in the comment section below, we are dying to hear what you think about this crazy twist. And, don’t forget to check CDL regularly for more The Young and the Restless spoilers.

Here are some reactions from fans on Soap Opera Spy over the shocking news that Mariah is Cassie’s Fake Ghost:

Ian def got game. Wait til it’s revealed that he’s NOT Dylan’s daddy…… And Paul Williams IS! That’s my theory!

this is why they are tanking! that doesn’t make any sense at all that MARIAH is fake cassie!!! who is writing this mess!!! LOL if i had not already stopped watching – this would do it!

You know what is weird about this? Tyler said that Lily reminded him of his ex Mariah. I see no resemblance at all. lol But Okay.

So we see that fans already have opinions on the shocking reveal that you will see on the April 29 episode of Y&R.