The Young and the Restless Spoilers: Fake Ghost Cassie and Ian Ward are Working Together – Watch Out Victor Newman! 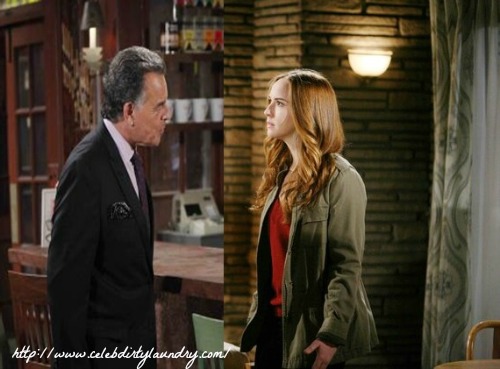 May Sweeps are nearly here, and that means our favorite soap operas are pulling out all of the stops, including CBS’s The Young and the Restless. Victor Newman has a history of scheming and manipulating the residents of Genoa City, including his own family. He always manages to writhe his way out of the sticky situations he creates. According to The Young and the Restless spoilers for Monday April 28th, Victor Newman is in way over his head, and may have finally met his match.

Recently on The Young and the Restless Nick learned that his father Victor had hired a woman that could pass as his dead daughter Cassie’s twin to haunt Sharon and make her think she was Cassie’s ghost. Nick came face to face with the Fake Ghost Cassie and realizes that Sharon wasn’t crazy, there really was a woman creeping around their home that bared an uncanny resemblance to their daughter.

After speaking to the Fake Ghost Cassie, Nick put two and two together and realized that his father Victor had hired her to haunt Sharon. Despite Victor desperately pleading for forgiveness and insisting he hired the Fake Ghost Cassie to help his family and expose Sharon’s secret, Nick disowned his father and declared he wanted nothing to do with him. Victor’s wife Nicki wasn’t far behind their son Nick, and considers Victor’s latest scheme was unforgivable.

Victor made a major mistake when he got cocky and underestimated the girl he was hiring to haunt Sharon. Despite Victor threatening her life and blackmailing her, she still disobeyed him and ratted him out to Nick and revealed that Victor was paying her. Does she have a death wish? Well no, the opposite actually, she has a secret hand that she hasn’t revealed yet.

In the last few episodes of The Young and the Restless the Fake Ghost Cassie kept calling someone and telling them “she was in trouble” and she was going to need their help. On Monday April 28th her secret confidante will finally be revealed, and Y&R fans will be shocked to learn that it is none other than Ian Ward, Victor’s nemesis and his wife Nikki’s tormentor.

So, the question on everyone’s mind is obviously – how does Fake Ghost Cassie know Ian Ward? Is she working for him too? Did Ian pay her to work for Victor and feed him inside information on the entire Newman family? Or, is she another young woman that Ian managed to brainwash like Nikki and Summer? Regardless of how Fake Ghost Cassie and Ian Ward know each other, they must be up to no good. Are you shocked that Ian Ward is involved in Victor’s ghost-for-hire scheme? How do you think she knows Ian? Share your thoughts and theories in the comment section below and don’t forget to check CDL tomorrow for more The Young and the Restless spoilers.

What do you think the real relationship is between Ian and fake Cassie? Even more intriguing is the actual true identity of “Cassie’s Ghost.” Will we learn that plastic surgery was involved or are the whispers true, that Cassie had an identical twin? Some or all of these questions might be answered during May sweeps and we will bring anything we learn right to you here at CDL.

See how fans react to the Ian and Cassie’s ‘Ghost’ reveal:

wow that is a surprise

Bring on the excitement! Need some great story lines. It’s been way to boring lately!

I wonder if they’re related, and then maybe she’s related to Dylan. That would be a good way to tie her to someone.

What a marvelous idea!! I never thought of that, why would Ian know her

But if Dylans not his son …

One thing we can be sure of is that since Ian and Victor’s hired ghost are associated it will not be a good thing for Victor!