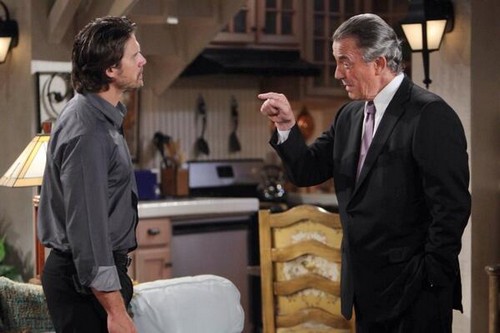 Victor Newman’s shenanigans never cease to amaze us, but Y&R fans will surely be delighted to hear that  on April 23 The Young and the Restless Victor’s lies and schemes will finally blow up in his face. Nick, Victor, Sharon, and the Fake Ghost Cassie that Victor hired all wind up in the same room tomorrow and there is no way he can deny hiring his dead granddaughter’s doppelganger to haunt Sharon.

On today’s episode of Y&R Victor attempts to explain to Nick that he hired a Fake Ghost Cassie to haunt Sharon…for him. He knows Sharon is keeping a life-changing secret from Nick, and he planned to have the Fake Ghost Cassie get the secret out of her so he could share it with Nick (right, because Victor would just hand over a secret without blackmailing someone with it). The problem is, his ghost for hire never got the secret out of Sharon, so he basically drove her insane and caused her to receive electroshock therapy and lose her memory for nothing.

Nick has warned Victor numerous times to stop playing with members of his family like chess pieces, and this is clearly the last straw in Nick’s book. Secret or no secret, Victor Newman has officially crossed the line and it looks like he and Nick’s relationship is irreparable. Tomorrow on The Young and the Restless Nick Newman kicks his Dad Victor out of his life for once and for all.

Also on the April 23 show on The Young and the Restless Ian Ward pays his alleged son Dylan a visit and reveals to him that he has listed him in his will, and if anything happens to Ian then Dylan will inherit his entire empire. We think this is probably another one of Ian Ward’s schemes, and it will probably be just a matter of time before the other shoe drops and Dylan learns that there are strings attached. Y&R fans can also expect to see some touching scenes between Courtney and Noah and Christine and Paul tomorrow on the CBS daytime drama.

Do you think that Victor Newman really hired the Fake Ghost Cassie for Nick’s benefit, or did he once again have a hidden agenda? He had to have known the effect seeing her daughter’s ghost would have on Sharon. Do you agree with Nick for cutting his father off, or do you think that in a sick twisted way Victor really meant no harm? Let us know what you think in the comment section below and don’t forget to check CDL tomorrow for more The Young and the Restless spoilers.