The Young and the Restless Spoilers: Adam Newman Is Alive and Held Captive – Chelsea Lawson Gets Victor In On The Search 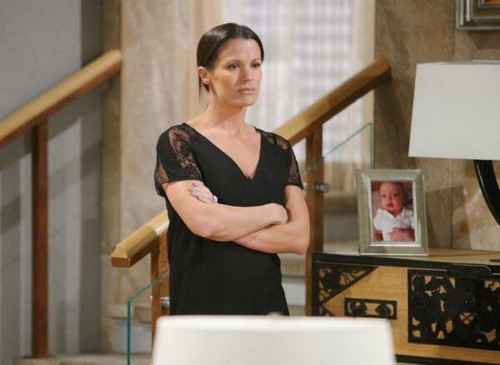 The Young and the Restless has been teasing fans for weeks about Adam Newman, leaving viewers guessing about whether or not he survived the fiery car crash that he and Billy Abbott were in back in January. After Billy and Adam’s car crashed, it exploded and burst into flames before anyone could pull his body out of the blaze. Although his body was never recovered, Adam Newman’s friends and family assumed he was dead. It appears that was not the case though.

After Billy and Adam’s car crash Y&R teased fans with a shot of a bloody hand covered in ash lying in the snow. Did it mean Adam Newman was alive? If he was alive, then where is he? Adam was obviously badly hurt, so who saved him and why didn’t they tell the Newman family that he was actually alive?

Today some of our Adam Newman questions were finally answered on The Young and the Restless. Yes, Adam Newman did manage to escape from the car accident, and he is indeed alive. Another clip of Adam’s infamous bloody hand was shown today on the CBS soap opera, and he appeared to by lying on bed, and he’s not alone. Whoever saved him appears to be playing doctor or has taken him to a doctor, because someone was standing over him with blue surgical gloves on in a dimly lit room.

It is official, Adam Newman will definitely be back to Genoa City, and probably sooner than later.  Chelsea Lawson is sure is is alive and tomorrow she is going to call Victor Newman and enlist his help in trying to find Adam.Y&R fans are curious where he has been this entire time, who has been helping him, and why his family hasn’t been notified that he is alive. But, all of those questions don’t hold a candle to the real question on every one’s mind, who is going to play the role of Adam Newman?

Michael Muhney played the role of Adam Newman since 2009. In late 2013 he found himself at the center of a sexual harassment scandal, and The Young and the Restless producers fired the popular actor. The last episode Muhney appeared in was the last episode that Adam Newman was seen alive. When Newman returns to Genoa City, the character will be played by a new actor. Sources have confirmed that Y&R producer Jill Farren Phelps was holding secret interviews and casting calls for the role of Adam Newman a few weeks ago, but she is keeping the identity of the new actor under wraps.

Young and the Restless fans are still in an uproar over the role of Billy Abbott being recast after Billy Miller was let go and the position was given to David Tom. Throwing Michael Muhney’s replacement into the mix could cause complete and utter upheaval among devoted Y&R fans.

Who do you think Jill Farren Phelps chose to play the role of Adam Newman when he returns to Genoa City? Leave your predictions in the comment section below.