The Young And The Restless Spoilers March 24-28: Billy Abbott’s Secret About Adam Newman – Could Nikki and Paul Hook Up – UPDATE 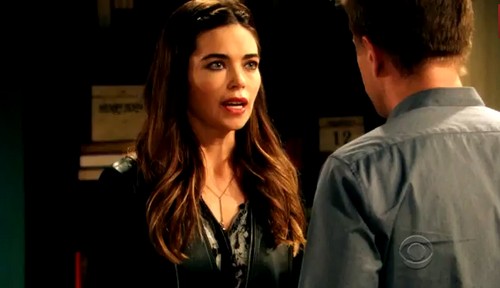 There are so many secrets on The Young and the Restless, it is frankly amazing the residents of Genoa City can keep them all straight, half the time the Y&R fans can’t even keep up with them. According to spoilers released for the week of March 24th-28th, fans can expect a lot of secrets to come to light on Y&R, and we may finally get some answers about Adam Newman.

Early this year on The Young and the Restless Billy Abbott nearly escaped death in a fiery car accident, Adam Newman was also in the accident and he wasn’t as lucky. Adam’s friend and family were under the impression that Adam Newman died in the car accident, but his wife Chelsea had doubts since his remains were never recovered. Last week a witness at the accident told Victor and Chelsea that Adam Newman was not in the car when it exploded, and he had escaped the wreckage. So, where is Adam Newman if he isn’t dead? According to the witness his clothes were on fire when he climbed out of the car, so he obviously required some medical attention. Next week, March 24th-28th on Y&R, Victor and Chelsea continue to search for answers as to Adam’s whereabouts. And, they learn that Billy is actually hiding something about Adam’s near death. Billy tells Victor to “drop it” when he presses him for answers, but we all know “dropping it” isn’t in Victor’s vocabulary, if anyone has a secret Victor will go above and beyond to learn what it is.

Ian Ward told Dylan a secret before he was arrested, and Dylan and Avery have been doing some investigating of their own. Next week, March 24th-28th, Dylan will finally sit down with his Mom Nikki and tell her the secret Ian told him. Fans have been speculating for weeks that Ian wasn’t Dylan’s Dad, and this week we will finally find out if that is the secret Ian told Dylan.

As always, The Young and the Restless looks to be packed full of can’t miss drama next week. Do you think that Billy Abbott has known this whole time that Adam Newman is alive? Is there a chance that Billy knows where Adam is now? Share your thoughts and theories in the comment section below, and don’t forget to check CDL tomorrow for more The Young and the Restless spoilers.

One of the highlights of today’s March 26th show was the banter on Soap Opera Spy pertaining to possibility of Victor being taken down a few pegs and Paul and Nikki hooking up… again!

Comments followed the flow of the episode:

Is it just me? I really like Paul and Nikki together, maybe she can dump Victor?

Yes, that is what I’m hoping! I love Paul and Nikki together!

Meanwhile as far as the March 27th episode we got a sneak peek and saw that Victor was being Victor… Tyler to Victor “If I were going to propose to your daughter Abby I would tell you.” Victor to Tyler, “I would not give my permission.”  Followed by the astute comment:

Victor needs to get over himself! “The ‘imposter’ Cassie is going to tell Nick and Sharon how he hired her to drive Sharon crazy! I can’t wait!!”

Let’s not forget that while Ian Ward is supposed to be Dylan’s son, there is an undercurrent of suspicion that in fact Paul is Dylan’s biological dad! Now if that gets out we can really imagine the end of Nikki and Victor’s marriage and the start of a new chapter for Nikki and Paul.

Michael tried to warn Kevin and give the very much in love dude the heads up on Chloe’s lukewarm sentiments on marrying him. Michael to Kevin, “I worry that you have vision of the future that Chloe does not share and you will end up getting hurt.” Kevin, “Where there is love there is hope.” Michael, “Even though that love is one sided?”

Comment: ahhhh how adorable is Kevin he gave Chloe a wedding ring and then kissed her hand. The best Chloe could do was hug him:(

Let’s hope Kevin doesn’t get his heart broken.  But as  we reported earlier, we know Chloe is leaving Y&R so good luck Kevin….