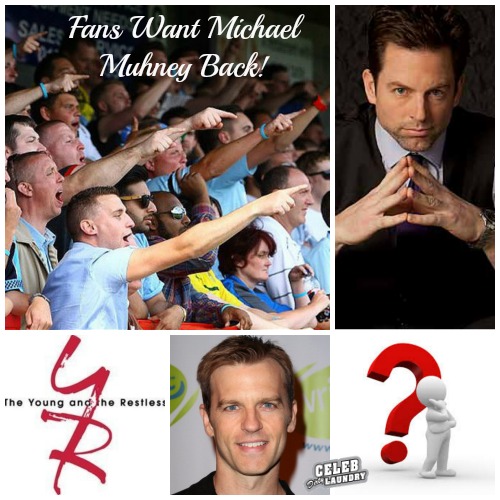 The Young and the Restless drama over Michael Muhney’s firing rages on. After Jill Farren Phelps sent Michael Muhney packing for allegedly groping a Y&R co-star, fans of the CBS soap opera made it very clear they were not pleased with her decision. After a few months the unrest began to die down over Muhney’s exit, until it became clear that Muhney’s character Adam Newman would be returning to Genoa city. Now, Muhney’s firing is as fresh as it was when it happened, and fans are taking to the internet to voice their opinions.

As it became obvious that the character of Adam Newman was returning to The Young and the Restless much sooner than we all expected, fans rushed to Soap Opera Spy’s Facebook Page to voice their concerns about Muhney’s replacement. As you can see from the comments below, the majority of Y&R fans want Muhney back, no ifs, ands, or buts about it.

“Sorry no one can replace MM as Adam! Y&R sucks!”

“No one can replace Michael Muhney’s shoes. Jill cannot make this work, the fans are for Michael Muhney all the way. You are losing the battle Jill.”

“Nope no one can replace Michael Muhney as Adam please bring him back!!”

Some fans are holding on to hope that when Adam Newman reemerges on The Young and the Restless, it will be Michael Muhney playing the part. Are you one of those fans? Who do you think Jill Farren Phelps will cast as Adam Newman? We know Jill’s been carrying on secret casting sessions and may have already selected the next Adam Newman.  Share your thoughts in theories in the comment section below, or you can head over to Soap Opera Spy’s Facebook Page and discuss Muhney’s firing with other Y&R fans.

Update: Sources close to the show have informed CDL exclusively that a replacement for Michael Muhney has not yet been found. Casting auditions are still taking place but the right actor hasn’t yet been hired. Furthermore, we hear that Trevor St. John will not be offered the role of Adam Newman. We will keep you informed as more information becomes available.

Still we are getting comments from people crying to get MM back:

You know how much I adore Michael Muhney, and he was done DIRTY. But if Y&R is recasting for sure, I WANT TREVOR!

And Muhney’s popularity extends all the way to Port Charles as this comment shows:

I am being drawn deeper and deeper into GH. The only thing that would make it better, would be to have Michael Muhney show up in Port Charles. I think I would unpack and move into Port Charles permanently then.

As far as the sentiments being expressed about Jill Farren Phelps, here are a couple of representative examples from our Soap Opera Spy Facebook page:

This is a cheap trick by Jill to try to get viewers back to the show. Good luck with that Jill, you sneaky hypocrite.

Fans feel that Muhney was unfairly denied a nomination for a Daytime Emmy – their devotion knows no bounds:

I would LOVE to see MM playing Adam Newman again. There is only one man that can play him and that is MM, however, I am afraid if he did come back, he would never be treated equally with all the other co-stars. We all know he should have been nominated for an Emmy for his performance. Billy Miller was good, but Michael Muhney was better. In my heart I feel like Sony CBS and JFP had a way to stop his nomination. He needs to be on Primetime or another soap that will treat him like he needs to be treated, with respect, dignity, and appreciated for his talent.

So that’s it for now – when we learn the identity of the actor replacing Michael Muhney for the Adam Newman role we will share that info with you here and on Soap Opera Spy.