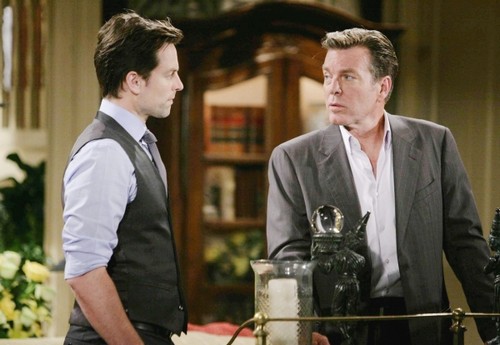 Recently on The Young and the Restless Victor Newman’s web of lies came crashing down on him when Nick discovered he had hired a Cassie Look-A-Like to haunt Sharon and make her think she was seeing her dead daughter’s ghost. As a result of his latest scheme Nick Newman officially disowned his father Victor.

According to The Young and the Restless spoilers for the week of April 28th – May 2nd, Victor Newman didn’t learn his lesson and he continues to interfere with his family’s lives and. While Nick and Sharon set out on a mission to discover the truth about the secret Victor says she was supposedly keeping (unfortunately she can’t remember it due to her electroshock therapy), Victor continues to meddle in the lives of his children and orders his Granddaughter Summer to stay away from Sharon, and begs Nikki to forgive him for his latest scheme.

The Newmans aren’t the only family in turmoil during the week of April 28th – May 2nd. Y&R spoilers tease that Chloe makes a shocking announcement, and a devastated Kevin turns to his brother Michael for assistance. Michael may have his hands full consoling Lauren over their fake pregnancy scare, and may not be able to be there for his little brother though.

And what do you think Chloe’s big announcement is? We know Elizabeth Hendrickson is leaving Y&R, so could Chloe be moving out of Genoa City? Well sit down for this one – Chloe wants to have another child with Billy!!! They both feel that the greatest thing they ever did together was to produce Delia Abbott who of course was killed in a hit and run car accident, presumably by Adam Newman.

The Young and the Restless spoilers also tease that Chelsea will begin putting together a memorial for her late husband Adam Newman. With May Sweeps coming up and the fact that Jill Farren Phelps spent the first half of April interviewing potential Michael Muhney replacements, the stars are aligning and there is a huge chance we could meet the new Adam Newman next week (April 28-May 2), or the week after (May 5 – May 9).

Do you think Nikki Newman will forgive Victor for the millionth time and take him back even though he hired a woman to pose as his dead Granddaughter’s ghost?

And lastly, who do you want to see take on the role of Adam Newman? Share your thoughts and theories in the comment section below and don’t forget to check CDL tomorrow for more The Young and the Restless spoilers.

I’ve been looking around the web and consulting my industry sources for more information on Michael Muhney’s firing and the consequent casting for a new Adam Newman. There is a reporter named Nelson Branco who has done some investigative work on how exactly and why Michael was fired – the executive summary is that MM is innocent of the charges against him of groping Hunter King and was fired for other reasons. We will be doing a special post this week on all of this.