The Young and the Restless Spoilers: Victoria Learns If Billy or Stitch is Baby’s Father – Billy Prefers Chelsea Anyway? 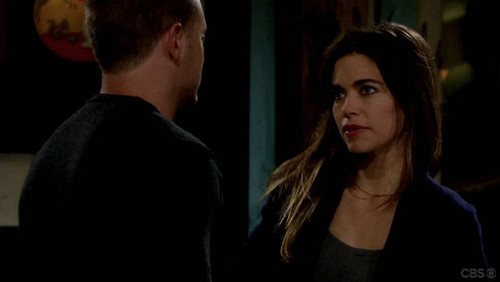 The Young and the Restless fans have watched the love triangle between Victoria, Billy, and Stitch develop over the course of the last few months. As if the situation couldn’t get any more complicated, Chelsea has been thrown in to the mix, turning it in to a “love quadrangle” which indirectly involves Adam Newman who everyone in Genoa City believes dead but is watching Chelsea and Billy’s every move! The Young and the Restless spoilers for the next few weeks tease that situation is only going to get messier before it is resolved.

Y&R spoilers tease that soon Victoria will have a paternity test and learn whether she is carrying Stitch’s baby or Billy’s baby. However, Chelsea and Kevin recently learned that Stitch is hiding behind a fake name and social security number that he stole from a kid he grew up with after he passed away. Once they figure out what Stitch’s real name is, it will only be a matter of time before his entire secret comes crashing down. People don’t assume a new identity unless they have something seriously horrible to hide. Victoria is going to be a hot mess if she finds out she is carrying a murderer’s child.

Victoria may not be able to go running back to Billy when she finds out the truth about Stitch though, because he started having sex with Chelsea. At the beginning of this month Victoria had two men fighting to be with her and her unborn baby. By the end of this month, Victoria could end up pregnant and alone.

What do you think Y&R fans? Do you think Victoria and Billy will end up together? Is there a chance Victoria could find out Stitch’s secret and still want to be with him afterwards? Do you think Billy should choose Chelsea or Victoria? Let us know what you think in the comments below and don’t forget to check CDL tomorrow for more The Young and the Restless spoilers.