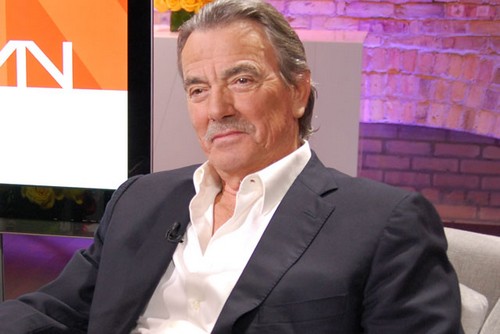 Victor Newman is in a world of trouble right now on The Young and the Restless for “playing God” and controlling his family. Although he argues that everything he does is for his family, it usually just winds up hurting his family. His most recent scheme involved hiring Mariah to pose as his dead Granddaughter’s ghost to haunt Sharon. Victor believes his actions were completely justified because he was trying to find out Sharon’s secret and help out his son Nick.

Hiring a con-artist to haunt your ex-wife/daughter-in-law is possibly an all time low for Victor Newman, but any Y&R fan can tell you that it probably won’t be the last time he meddles or interferes with his family’s lives. Over the years Victor Newman has developed a pretty bad reputation of being incapable of not being in control.

During the May 30th episode of the Young and the Restless Victoria Newman confessed to her Dad Victor that she is pregnant, but she has to wait a few weeks to take a paternity test and learn whether or not the baby belongs to Stitch or her estranged husband Billy Abbott. It’s no secret that Victor despises Billy, and likes Stitch. The Y&R spoilers for the week of June 2nd even tease that Stitch and Victor “share a moment.”

It isn’t a stretch to say that Victor Newman is hoping Stitch is the father of his new grandchild, and not Billy. How far will Victor Newman go to make sure that happens though? Tampering with the results of a paternity test would be a drop in the bucket compared to Victor Newman’s other crimes as of late. Do you think that Victor will make sure the DNA test proves Stitch is the father of Victoria’s baby by any means possible? Or, has Victor learned his lesson and decide to sit this family drama out? Let us know what you think in the comments below, and don’t forget to check CDL for more The Young and the Restless spoilers.