The Young and the Restless Spoilers: Stitch Confesses He’s a Murderer To Victoria – Christine Jealous of Paul and Nikki 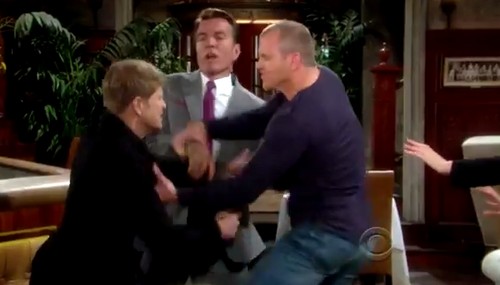 The Young and the Restless fans have been speculating for months now what the secret that Stich is hiding could be. Over the course of the last few weeks Y&R fans have learned that Stitch is actually Kelly’s sister, is hiding behind the name of a childhood friend that passed away, and he murdered someone. According to The Young and the Restless spoilers for the week of July 21st-25th Stitch finally gets up the nerve to tell Victoria the truth about his past. Fans can also expect to see Billy and Chelsea growing closer, and attempting to have a romantic evening.

Aside from finally learning Stitch’s secret, The Young and the Restless spoilers for the week of July 21st tease lots of drama in Genoa City. Nikki Newman goes to court for the lawsuit Ian Ward filed against her, claiming that she lied to him for years regarding the paternity of Dylan McAvoy, and caused him emotional stress. According to spoilers, Nikki and Ian’s trial will drudge up Nikki and Paul’s history, and Christine’s jealousy will get the best of her after listening to testimonies of Paul and Nikki’s teenage love affair.

While his wife is being sued, Victor Newman will be busy doing what he does best, scheming. Y&R spoilers for the week of July 21st tease that Victor goes behind Jack’s back and continues his mission to wake up Jack’s comatose wife Phyllis Newman. Victor is determined to bring Phyllis back to Genoa City so that she can reveal the secret that Sharon has been hiding form Nick.

The week of July 21st-25th looks like it will be full of can’t miss Y&R drama? Are you as excited as we are to see Stitch finally confess his secret to Victoria? Who do you think he murdered? How ironic would it be if Victoria found out the father of her baby was a murderer? Billy Abbott won’t seem that bad once the truth about Stitch comes out. Let us know what you think in the comments below and don’t forget to check CDL tomorrow for more The Young and the Restless spoilers.