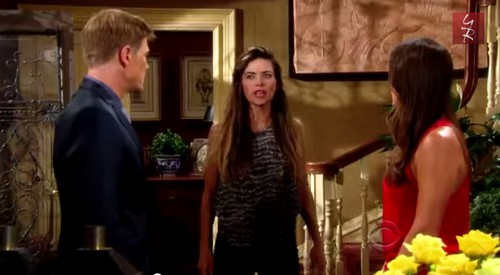 This week The Young and the Restless fans will get to witness hypocrisy at its finest. According to a Y&R spoiler video, Chelsea Newman and Billy Abbott share a hot and steamy hook-up this week on The Young and the Restless, and Victoria is furious when she finds out. Apparently it is perfectly okay for her to date another man and possibly get pregnant by him while she and Billy are separated, but he is supposed to spend the entire time pining away for her and not even looking at another woman.

On the July 7th episode of Y&R Billy was helping Chelsea investigate the buzzing noise in her son’s bedroom (which unbeknownst to them was Adam Newman’s spy cameras), and he hurt his back. Chelsea offered him a massage, and one thing lead to another, and before fans knew it they were ripping each other’s clothes off. In the Y&R spoiler video it looks like Victoria walks in on Chelsea and Billy kissing, and demands to know if they slept together.

The Young and the Restless spoiler video for the week of July 7th also shows Devon sharing a close moment with his dad Neil’s new wife Hilary. In the video Devon tells Hilary, “My father married the woman I want, my feelings for you aren’t going to go away.” Devon also looks like he is about to tell his dad Neil how he feels about his new step-mom Hilary, which could cause some serious drama on Y&R.

So Y&R fans, what do you think about Chelsea and Billy sleeping together? Do you think he will leave Chelsea high and dry and go running back to Victoria? And, how do you feel about the love triangle developing between Devon, Hilary, and Neil? Let us know what you think in the comments below and don’t forget to check CDL for more The Young and the Restless spoilers tomorrow.