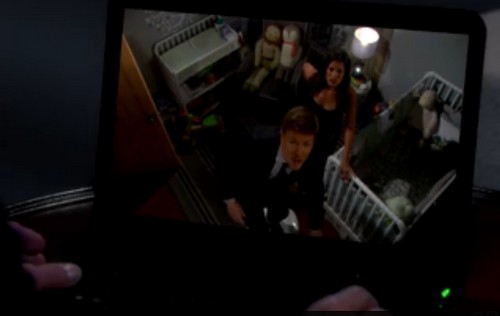 Recent reports are claiming that TPTB at The Young and the Restless are no closer to casting a Michael Muhney replacement than they were three months ago, which probably explains why we are seeing less and less of Adam Newman’s hands. Most likely Jill Farren Phelps had her eyes set on a Muhney replacement and thought she could land the actor (cough, Cameron Mathison), so she began throwing in more and more hands scenes. When she realized Cameron, like many other high-profile soap actors, wouldn’t touch that controversial role with a ten foot pole, they had to lay off the hands scenes because it would be awhile before they actually had a face to match them.

However, our Y&R spoiler source has confirmed that during the July 4th episode we will get to see Adam Newman’s hands again, for the first time in several weeks. Adam Newman will be watching over his son’s nursery via spy-cam like he has in the past, but Chelsea might be onto him! According to spoilers, Chelsea will hear an incessant buzzing in the nursery and searches the room for the source. When she can’t locate where the buzzing is coming from, she has Billy come in and he takes the ceiling apart!

It looks like Adam Newman’s spy-cameras are going to be found very soon! The odds of Billy and Chelsea figuring out that Adam is the one that had the cameras planted there are pretty slim, since they think he is dead. They will most likely assume it was Victor Newman that planted the cameras there, since spying on his family members is right up his alley.

Do you think Billy and Chelsea will find the spy cameras? And, if they do, will they figure out that Adam is alive and he had them planted? Share your thoughts and theories in the comments section below, and check CDL tomorrow for more The Young and the Restless spoilers.