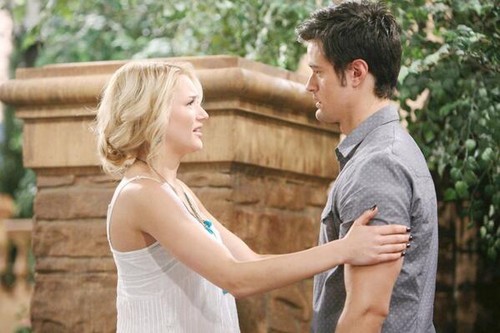 The Young and the Restless spoilers for the July 3 episode tease a twist that no Y&R fans saw coming. With all of the drama going on in Genoa City right now, everyone seems to be too preoccupied to get Summer Newman under control. With her mom Phyllis in a coma and her dad spending every waking second with Kelly, Summer seems to be getting away with murder, or at least aiding and abetting an almost murderer.

In the past month Summer threw herself at a man she just met (Austin), basically coerced him into taking her virginity, then announced she was in love with him, forgave him for kidnapping her own Aunt and nearly killing a cop, tried to run across the Canadian border with the fugitive. Oh, and on the July 2nd episode of Y&R, Summer went behind her father’s back and convinced the bank to hand over her trust fund, which Jack specifically told her not to touch, and used it to bail Austin out of jail.

During the July 2nd episode of The Young and the Restless, Summer told Austin she had a plan to keep him out of jail and avoid being charged with anything too serious (like attempted murder). Naturally, we were all a little curious what her plan was. Considering the ridiculous choices she has made, one right after another, we couldn’t wait to see what half-baked scheme she had cooked up now.

According to our exclusive CDL The Young and the Restless spoiler source, on July 3rd Jack will pay his daughter Summer a visit, and is less than pleased when he finds her with Austin. Jack is already furious that Summer bailed him out behind his back, and to add insult to injury, Austin announces that he and Summer got married.

We’ve all seen the cliché soap opera storyline, “married for an alibi,” multiple times. But, we’re a little confused as to how marrying Austin will protect him from doing prison time. Even if Summer can’t testify against her husband Austin in court, everyone else that was there the day he shot Paul and kidnapped Avery can. Perhaps we aren’t giving Summer and Austin the benefit of the doubt, and they have some brilliant trick up their sleeves? It’s doubtful though.

What do you think about Summer and Austin getting married? How is saying “I Do” supposed to prevent Austin from going to prison for shooting Paul? Let us know what you think in the comments below and don’t forget to check CDL tomorrow for more The Young and the Restless spoilers.