The Young and the Restless Spoilers: Is Dylan Dead – Flatlines After Surgery – Paul Brain Damaged? 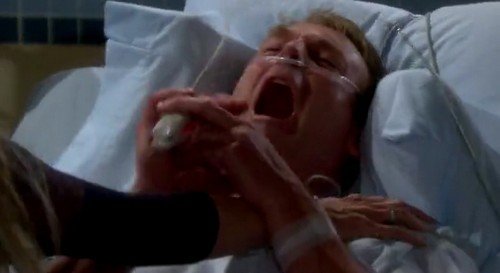 The Young and the Restless fans have been watching Paul William’s cling to life since he was shot earlier this month while he was saving Avery from her stalker Austin. Since Paul’s shooting, Y&R fans have been on an emotional rollercoaster. First we learned no one could save Paul, then it was revealed Dylan was his son and couldn’t save Paul, then Dylan decided to risk his life and go through with the surgery anyways.

Paul Williams and Dylan McAvoy went through with the surgery, and they aren’t exactly making a full recovery. Paul woke up confused and out of touch with reality. Christine and Nikki both rushed to his side and explained to him that he hadn’t just shot his son Ricky (which happened in 2012), and Nikki took it upon herself to drop the bomb on him that Dylan McAvoy was his son.

Meanwhile, Dylan seemed to come out of the surgery unscathed, and he even snuck in to Paul’s room on his wheelchair to check on him after the surgery. However, in an unexpected twist, he laid back down in his bed and closed his eyes and Avery could not wake him up — all of the machines in his room began beeping and he appeared to have flatlined.

The odds of Dylan actually dying on The Young and the Restless are slim to none; however, the surgery obviously has had a seriously negative impact on him. Generally, when someone endures a near-death experience, it triggers something emotional in them. When Dylan first arrived in Genoa City, he had anger issues and was suffering from PTSD, from his time in the army. Perhaps the stress of the surgery and learning that Paul is his biological father will trigger something in Dylan and bring back his PTSD when he wakes up?

What do you think, Y&R fans? Will Dylan be the same Dylan when he comes to, or do you think all of this stress could have triggered some of his old issues? Let us know what you think in the comments below and don’t forget to check CDL for all of your The Young and the Restless spoilers.