The Young and the Restless Spoilers: Paul Williams Dying – Brave Dylan Risks His Own Life For Transplant Surgery 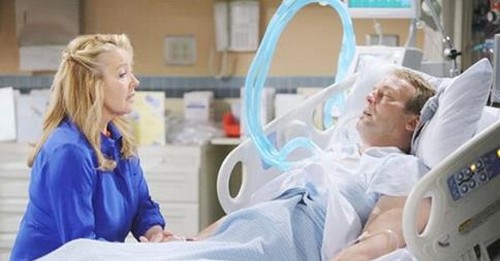 The drama on CBS’s soap opera The Young and the Restless is really heating up during the week of June 23-27, according to Y&R spoilers. Paul Williams has been on his death bed for nearly two weeks, but Dylan McAvoy just learned that the dying Genoa City police officer is actually his biological father. Dylan was already told by doctors that he is a match to donate part of his liver and save Paul’s life, however the doctor refused to do the procedure because it could cost Dylan his life due to previous injuries when he was in the army.

According to Y&R spoilers for the week of June 23rd, Dylan is rattled by the news that Paul is his father, and begins pressuring the doctors to do the transplant, regardless of the possible outcome. Dylan’s girlfriend Avery and mother Nikki Newman will fight with Dylan to try to convince him not to take a chance on his life by being Paul’s donor.

Neil and Hilary recently became engaged, and decided not to wait and have a wedding immediately. The Young and the Restless spoilers tease that Neil and Hilary’s whirlwind wedding will light a fire under Neil’s son Devon, who is secretly in love with Hilary. During the week of June 23rd Devon will fight for Hilary, regardless of her relationship with his father.

The Young and the Restless spoilers for the week of June 23rd also tease that an unexpected alliance is formed between Victor Newman and his estranged son Nick. Victor overheard Mariah and Ian talking, and knows that they are working together. Nick wants his dead daughter’s doppelganger out of his and Sharon’s life, and Victor wants to take down Ian Ward, so they have a common goal now.

According to Y&R spoilers for the week of June 23rd, fans should not miss a second of the soap opera during the upcoming week. Do you think that Dylan will go through with the dangerous surgery to save Paul, despite warnings from the doctors and his family? And what about Neil and Hilary’s wedding, do you think she will go through with it after Devon professes his love to her? Share your thoughts and theories in the comment section below and don’t forget to check CDL daily for more The Young and the Restless spoilers.