The Young and the Restless Spoilers: Paul Williams’ Death Nears as Dylan Helpless to Save Father! 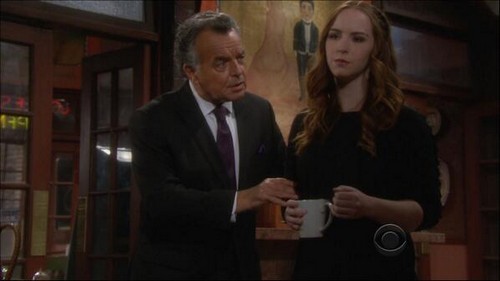 The Young and the Restless’ predictable writers had a “shocking” reveal planned for this week on the CBS daytime drama, however Y&R fans figured out months ago that Dylan was actually Paul Williams’ son and not Ian Ward’s, so it’s really not that “shocking.” According to our exclusive CDL The Young and the Restless spoilers source, Ian Ward’s wife will pay Victor Newman a visit on Tuesday June 17th and reveal that Ian Ward is not physically able to have children and there is no possible way that he fathered Nikki’s son Dylan.

So, the news that Ian Ward is sterile, combined with the fact that Nikki just happened to remember she had sex with Paul around the time Dylan was conceived, and the fact that Dylan just learned he and Paul have the same blood-type makes it pretty obvious where this storyline is going.

However, according to Y&R spoilers there is one interesting twist that we didn’t see coming. We all thought that Dylan would miraculously learn he is a match to save Paul’s life and be his donor, and reveal that he is his long lost son. Then, they would all live happily ever after. However, our exclusive spoiler source reports that on the June 17th episode Dylan will learn that he is indeed a match, however due to his injuries when he was in the army, he is unable to be a donor. The surgery could have some serious ramifications, it will save Paul’s life, but it will cost Dylan his.

We all assumed that Paul will be saved, and hadn’t considered the fact that he truly might die. If Dylan can’t be a donor and Father Todd isn’t a match either, then Paul’s fate is looking pretty bleak. Generally if a major character like Paul Williams is set to be killed off, we hear rumblings about it in advance. Could it be possible that Jill Farren Phelps is striking again and killing off another major character? Share your thoughts and theories in the comment section below and don’t forget to check CDL tomorrow for more The Young and the Restless spoilers.