The Young and the Restless Spoilers: Both Austin and Paul Get Shot! Summer and Austin Then Take Off Together? 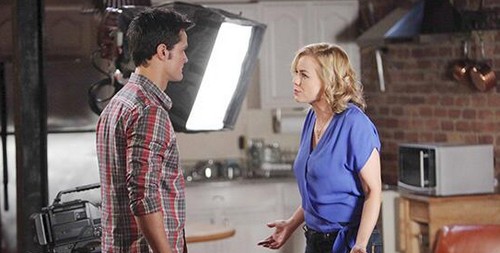 Genoa City is action packed this week on the CBS soap opera The Young and the Restless. According to Y&R spoilers for June 11, Dylan will rush to Nicki’s house and alert her of the shooting, so that she can head to the hospital and join the rest of Paul William’s friends and family who are holding vigil and waiting to see if he pulls through. Spoilers also tease that Paul is in desperate need of a liver transplant, and the only person who is a match is Dylan McAvoy, who unbeknownst to Paul is actually his biological son.

According to our exclusive CDL The Young and the Restless spoilers source, Paul Williams wasn’t the only person shot during the altercation with Austin. Noah Newman’s girlfriend Courtney arrived with Paul and chased after Austin when the gun went off, she fired a few shots into the distance but no one thought she could have possibly hit him. Y&R spoilers tease that in the June 11th episode of the soap opera it will be revealed that Austin was actually shot by Courtney and is also injured.

Our The Young and the Restless spoiler source went on to explain that after Austin eludes the Genoa City police and is officially on the run, he meets up with Summer and fills her in on why he kidnapped Avery and what happened to Paul. Summer has never been a good judge of character or capable of making good choices, so it won’t come to much as a surprise to Y&R fans that Summer Newman actually is okay with what Austin has done, sympathizes for him, and is going to nurse his gunshot wound.

Rumors were circulating the internet a few weeks ago that Summer and Austin were going to run off and leave the country together. When it was revealed that Austin was “4MJ” and then Paul was shot, we all assumed those rumors were completely off and there was no way Summer was going to run away with a man that kidnapped her Aunt and shot a cop. After learning these latest Y&R spoilers, it actually seems possible that Summer might actually run away with Austin and leave the country with him.

What do you think about all of the drama unfolding on The Young and the Restless this week? Can you believe that Summer is actually aiding and abetting Austin right now? She has known him for just a few weeks; what could possibly inspire her to break the law and help him? Do you think the rumors are true and Summer and Austin are going to try to run away together, Bonnie and Clyde style? Let us know what you think in the comments below and don’t forget to check CDL tomorrow for more The Young and the Restless spoilers.