The Young and The Restless Spoilers: Dylan Saves Father Paul After Shot By Austin Rescuing Avery 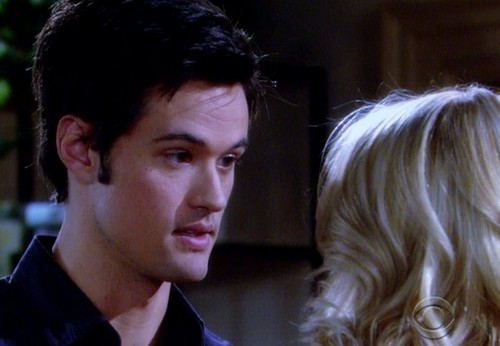 CBS’s daytime drama The Young and the Restless has been moving along pretty slowly, but that is all about to change. According to our exclusive Y&R spoiler source, some crazy drama is about to erupt in Genoa City. Weeks ago an anonymous stalker began leaving Avery unsettling messages online, and she and Dylan assumed it was his father Ian Ward, seeing as how it had Ian’s handy-work all over it. However in a shocking twist it was recently revealed that Avery’s internet stalker is the camera-guy on her internet cooking show, Austin. (Yes, the same guy that Summer is desperately trying to hook up with.)

On Monday June 9th we learned from CDL’s exclusive source that Austin will finally snap and reveal that he is much more dangerous than any of us expected. He lures Avery into his apartment, and proceeds to film her apologizing to something she allegedly did to him. Some spoilers tease that Avery defended the man that killed Austin’s Mom, however that theory hasn’t actually been confirmed. Regardless, Austin’s beef with Avery is most likely related to her time as a lawyer.

The Young and the Restless spoilers for the week of June 9th also reveal that Paul winds up getting shot and is rushed to the hospital. We’re assuming that the two events are related and Paul is shot while trying to rescue Avery from Austin. According to Y&R spoilers Paul is in critical condition and in desperate need of a transplant, while he is lying on his death bed it is revealed that Dylan is his son and a viable donor, so he will end up saving his own Dad’s life.

Do you think that Austin kidnapping Summer and Paul getting shot are related? Could Avery’s stalker Austin actually be the person who shoots and nearly kills Paul? Let us know what you think in the comments below and don’t forget to check CDL for all of you’re the Young and the Restless spoilers.