The Young and the Restless Spoilers June 20: Victor Spies on Ian Ward and Mariah – Dylan Learns Paul Is His Dad 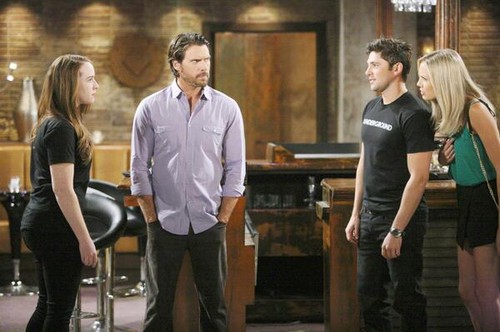 There are multiple storylines coming to a head this week on CBS’s soap opera The Young and the Restless. According to our CDL exclusive The Young and the Restless spoilers source, the Friday June 20th episode will be full of can’t miss drama. Spoilers tease that Paul William’s health will take a turn for the worse and Nikki Newman will head in to his hospital room to say her goodbyes. While speaking to an unconscious Paul, she confesses to him that Dylan McAvoy is indeed their son. Although Paul obviously doesn’t hear Nikki, Dylan is eavesdropping and overhears everything.

On the Young and the Restless this week, Dylan learned that he is indeed a positive match to be a liver donor and save Paul’s life; however, the doctor refused to do the transplant because he feared that, with Dylan’s previous injuries, it could cost him his own life. Now that Dylan knows Paul is his father, the odds of him standing by and doing nothing to save him are slim to none. Dylan will most likely find a doctor who is willing to do the surgery regardless of the possible ramifications, in a last ditch attempt to save his father’s life.

Also, according to CDL’s exclusive The Young and the Restless spoiler source, Neil’s whirlwind romance with Hilary takes a dramatic turn. Neil wants Hilary to marry him right away, as in the next day when the government buildings are open and they can get a license. Hilary agrees to the shotgun wedding, but Neil’s son Devon is not okay with it. When he learns that the love of his life will be his step-mom in less than twenty-four hours, he tracks Hilary down and professes his love to her and kisses her.

Meanwhile, at Nick’s bar, the Newman family has called the cops on Mariah, convinced that she stole Noah’s wallet. After Mariah storms out and quits her job, Abby confesses to Noah that she has his wallet and set Mariah up. Outside of the bar, Mariah runs into Ian Ward and cries to him that the Newman family won’t accept her, he gives her a pep talk and tells her to follow the plan they have and stay close to Sharon Newman. Victor Newman lurks in the shadows and overhears their conversation.

So, Y&R fans, what do you think about all of the drama unfolding on the June 20th? Do you think Victor will expose Ian and Mariah’s plan? After all his main goal is to get rid of Sharon, and that seems to be Ian’s main goal as well. Do you think that once Dylan learns Paul is his father he will go through with the transplant despite the fact that it could kill him? Share your thoughts and theories in the comments section below and don’t forget to check CDL for all of you’re the Young and the Restless spoilers.