The Young and the Restless Spoilers Week of May 26: Ian Ward Blackmails The Newman Family – Chloe Says Goodbye

BY Amanda Austin on May 26, 2014 | Comments: 5 comments
Related : Soap Opera, Spoiler, Television, The Young and the Restless 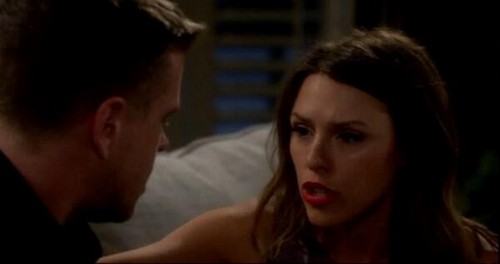 Genoa City is never a dull place to live, but The Young and the Restless spoilers for the week of May 26-30 tease even more drama than usual for our favorite Y&R characters. And, the craziness starts on Monday when an unlikely duo schemes together to conquer a common enemy.

Victor Newman is still on the outs with his family, however that doesn’t stop Dylan from joining forces with him to take down Ian Ward once and for all. And, time is of the essence because Ian claims to have a secret that could destroy the Newman Family.

According to The Young and the Restless spoilers, fans may shed a few tears before the week of May 26 comes to a close. Tensions mount as the anniversary of Cassie Newman’s death arrives, which rips the band aid off the barely healed wound Victor Newman recently created when he paid Mariah to run around Genoa City posing as Cassie’s ghost.

Some Y&R fans have speculated that Mariah may actually be Cassie or somehow related to Cassie, and the anniversary of Cassie’s death would be an opportune time for the writers to reveal the truth about why Mariah is a dead ringer for Cassie.

While half of Genoa City is mourning Cassie’s death, the rest of the residents of the fictional soap opera city will be saying good-bye to Chloe. It’s no secret that Elizabeth Hendrickson opted to leave the daytime drama, and the week of May 26 is supposed to be her last week on air.

The Young and the Restless spoilers also tease some serious relationship drama for the week of May 26. Summer is shocked when she learns that her dad Jack is sleeping with Kelly, feeling distraught she rushes into the arms of Austin, and they share their first kiss. Meanwhile, Tyler and Abby’s relationship continues to crumble over his loyalty to Mariah. And, Lily desperately attempts to destroy her father Neil’s relationship with her nemesis Hilary.

The Young and the Restless seems to finally be picking up pace, and May 26-30 looks like it will be full of must-see episodes. What do you think of Dylan and Victor’s new partnership? More importantly, what do you think Ian Ward’s big secret is that could tear apart the Newman family? And, what about Cassie and Mariah? Do you think they are somehow related or is it just a mere coincidence they look like identical twins? Share your thoughts and theories in the comment section below, and don’t forget to check CDL tomorrow for more The Young and the Restless spoilers.