The Young and the Restless Spoilers: Mariah Seduced Tyler’s Boss – Dylan and Victor Work Against Ian

BY Amanda Austin on May 22, 2014 | Comments: 3 comments
Related : Soap Opera, Spoiler, Television, The Young and the Restless 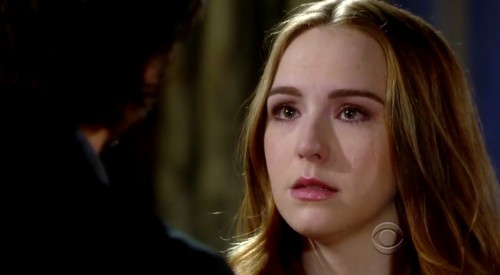 The Young and the Restless fans have been speculating for months now what secret Tyler is hiding from his fiancée Abby Newman. We recently learned that his ex-girlfriend Mariah is none other than Fake Ghost Cassie, however Mariah is holding a secret over Tyler’s head. According to our exclusive The Young and the Restless spoiler source, on Thursday May 22 Y&R fans will finally receive answers regarding Tyler and Mariah’s history before Genoa City.

The Young and the Restless spoilers for May 22 reveal that Tyler worked for a very wealthy man in Portland while he was in a relationship with Mariah. He wasn’t supposed to allow anyone in his boss’s mansion, however Mariah came to visit him on a regular basis. He learned that every time Mariah came to visit him she stole something from his boss’s mansion, and eventually his boss realized that he was missing high-value items. He threatened to have Tyler arrested for the theft, so Mariah seduced his boss and convinced him not to press charges against Mariah.

On Thursday May 22nd Tyler learns that Abby had her father Victor Newman turn Mariah over to the Portland Police Department and he is furious. He feels like he owes Mariah because she “saved him” and slept with his boss so that he didn’t have Tyler thrown in jail. (Apparently he doesn’t take into consideration that his boss never would have wanted to throw him in jail if Mariah hadn’t stolen from him to begin with.) Abby is just as furious when she sees how much Tyler still clearly cares about Mariah and is loyal to her.

Y&R spoilers also tease that on May 22nd Ian Ward will be up to his old tricks, and will try to have his son Dylan arrested again for assaulting him. Sick and tired of his father’s shenanigans, Dylan turns to the last person in Genoa City anyone expected, Victor Newman. The two form an unlikely partnership over their hatred for Ian Ward, and they make plans to work together to get him out of Genoa City.

So Y&R fans, what do you think of Tyler and Mariah’s history before they came to Genoa City? Were you hoping that their “secret” was something much crazier than robbing Tyler’s old boss? Do you think there is a possibility of Ian Ward being Tyler’s old boss? We still don’t know what his relationship to Mariah is, perhaps he is the man that she slept with to make sure Tyler wasn’t arrested? (Gross!) Let us know what you think in the comments below, and don’t forget to check CDL tomorrow for more The Young and the Restless spoilers.