The Young and the Restless Spoilers: Father and Son, Paul and Dylan Survive Operations! Nikki Dumps Victor For Paul? 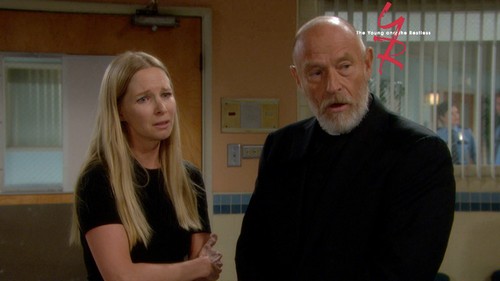 The Young and the Restless fans have watched Paul William cling to life after a near-fatal gunshot wound over the course of the last few weeks on the CBS soap opera. When Dylan McAvoy learned that Paul was actually his biological father, he decided to go through with a dangerous transplant surgery that the doctors advised him against, due to possible complications from his previous injuries when he was in the army. Not one, but two characters’ lives were hanging in the balance, and considering Jill Farren Phelps’s history of killing off major characters, Y&R fans were concerned.

According to our exclusive CDL The Young and the Restless spoiler source, fans have no reason to worry, and on the June 26th episode of Y&R, Dylan and Paul will both wake up from their surgeries and are in the clear. According to Y&R spoilers for the June 26th episode, Christine will try to keep Dylan’s paternity a secret from Paul. However, Dylan sneaks out of bed and slips in to Paul’s hospital room to share a moment with his father.

Now that Paul and Dylan are both in the clear, Y&R fans can focus on the next obvious issue. Will the fact that Paul and Nikki share a son cause them to rekindle an old flame? That seems to be huge concern for Paul’s wife Christine, who has been very jealous of Nikki Newman and her connection to Paul since he was shot.

Nikki seems to have temporarily patched things up with Victor, could she leave him again so that she can pursue a relationship with her new baby-daddy? Would you like to see Paul with Christine or Nikki? Let us know what you think in the comment section below, and don’t forget to check CDL for all of you’re the Young and the Restless spoilers.