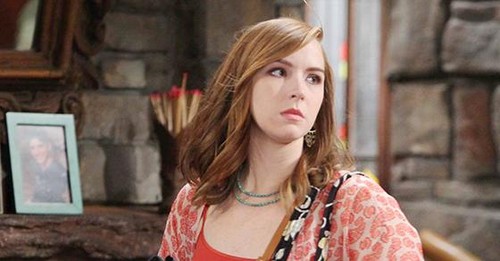 According to The Young and the Restless spoilers, Y&R fans will not want to miss the week of August 25-29. Genoa City residents will gather at the park for a remembrance ceremony for the late Katherine Chancellor. On August 26 Katherine’s husband Murphy will arrive for the ceremony, followed by her good friend Nina. En route to the ceremony an overwhelmed Nikki Newman finally officially falls off the wagon and pounds a shot of vodka. Meanwhile, Devon and Hilary will try to convince Neil to skip the ceremony, because they think it is too soon for him to venture out in public.

The Young and the Restless spoilers tease that on Monday August 25, Sharon and Nick begin frantically searching for Sharon’s long-lost daughter Mariah. However, according to Y&R spoilers they may be too late. Mariah pays Ian Ward a visit and informs him she is leaving Genoa City for good and there is nothing for her. In a shocking twist Ian actually tries to convince Mariah that she should stay with Sharon and that they have a connection, but apparently it is to no avail because when the FBI arrives at Ian’s apartment, he has moved out and he and Mariah are long gone.

The Young and the Restless fans can also expect to see Avery receive an unexpected phone call from her ex-husband Joe Clark, who will be arriving in Genoa City this Fall. When Jill isn’t frantically planning Katherine’s ceremony and dealing with Murphy, she accuses Michael of having an affair and cheating on Lauren because of his strange behavior. And, Friday 29th will be an episode you don’t want to miss, Phyllis Newman wakes up from her coma!

So Y&R fans, are you excited for Katherine’s ceremony? Do you think Devon and Hilary should let Neil attend? And, what about Nikki showing up drunk, do you think anyone will notice? What do you think about Michael Baldwin’s bizarre behavior? Do you believe the rumors that Jill Farren Phelps is planning to kill the character off with cancer? Let us know what you think in the comments below and don’t forget to check CDL tomorrow for more The Young and the Restless spoilers.