The Young and the Restless Spoilers: Billy and Victoria Discuss Baby – Dylan Freaks as Verdict Makes Austin A Free Man 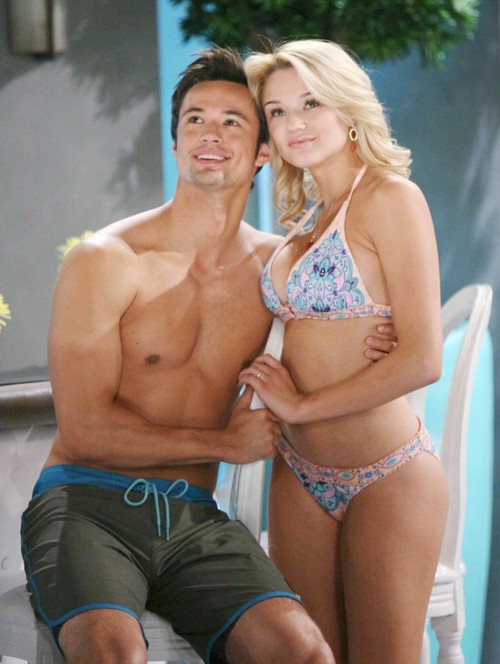 The Young and the Restless spoilers for Wednesday August 20 tease that a verdict is reached in Summer’s hubby Austin’s court case. Our exclusive CDL Y&R spoiler source reveals that everyone gathers at the Genoa City court room to see what Austin’s fate is. At the last minute Paul decides to not testify against Austin because “he’s just a kid” and despite Dylan’s obvious disapproval, Avery wrote the letter to the court that Leslie asked her to write, justifying Austin kidnapping her and shooting Paul.

According to The Young and the Restless spoilers for August 20, the judge issues Austin a legal slap on the wrist. Austin is sentenced to completing community service, and forced to pay a hefty fine. Only in Genoa City can you kidnap someone and shoot a cop, and be punished with community service. Dylan is livid when he learns that Austin is basically getting off scot-free for nearly killing his girlfriend and father. And, it also revealed that Dylan is so worked up over the court case and his new dad that “Crazy Dylan” is making a comeback, and he didn’t even both to come home the night before. Considering Dylan’s anger issues and track record, Austin might soon realize that he would have been better off going to jail, at least Dylan couldn’t get to him while he is behind bars.

Of course, Summer is thrilled that her criminal husband is free to roam the streets. Now that the verdict is in, it will be interesting to see how long Summer’s hubby sticks around to play house with her. Then again, Austin is virtually broke, so he will need to keep her around a little longer so that she can pay off his fines.

The Young and the Restless spoilers for Wednesday August 20th also tease that Y&R fans will see Neil struggling with his new impairment. And, Lily doesn’t make anything easier on him by rearranging all of the furniture in his house. Hilary informs Devon that she is going to ignore her feelings for him and “be there for her husband.” Across town Billy visits Victoria in the hospital and they discuss the baby, and Jack professes his love for Kelly. After court Avery receives a shocking phone call about her sister Phyllis.

So Y&R fans, are you shocked that Austin won’t be doing any jail time? Do you think that he is just using Summer or he genuinely cares about her? Do you think Dylan will do anything crazy because Austin got off scot-free? Let us know what you think in the comments below and don’t forget to check CDL tomorrow for more The Young and the Restless spoilers.