The Young and the Restless Spoilers: Ian and Helen Involved in Baby Mariah Theft – Avery and Leslie Keep Austin Out Of Jail? 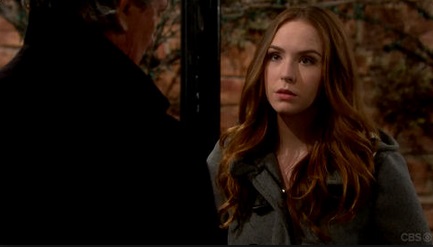 The Young and the Restless spoilers teased that Ian Ward’s reign of terror was far from over, and Ward even bragged that he had one more trick up his sleeve after his lawsuit against Nikki fell through. According to Y&R CDL exclusive spoilers for Friday August 15, Ian’s final “trick” looks like it is related to Mariah. Helen Copeland arrived in Genoa City and sat down to have a chat with Nick Newman, our exclusive spoiler source tells us that on the August 15th episode of Y&R, Helen explains to Nick that she “never wanted Mariah and it was all Ian’s idea.”

Then afterwards Helen meets up with Ian in the park and Nick Newman eavesdrops on the conversation, he overhears Ian warning Helen not to say anything to Nick because he “has no idea who Mariah is.” According to The Young and the Restless spoilers for August 15th, no one comes out and blatantly says that Mariah is Sharon’s daughter, but the Mariah/Cassie twin theory is beginning to make more and more sense.

Our spoiler source also tells us that on August 15 Y&R fans can expect to see Summer and Austin now celebrating Valentines Day, because they got to get all of the holidays in before he heads to prison. However, Leslie is hard at work trying to make sure that Austin doesn’t go to prison. On Friday’s episode of Y&R, Leslie pays Avery a visit and asks her to write a statement that she was the reason Austin was unstable, because of what happened with his mother years ago. Leslie seems certain that if Avery writes the letter to the court, there is a good chance she can get Austin out of doing any prison time.

After Leslie leaves, Avery reveals to Dylan that she plans on writing the letter, and Dylan is furious. How could she help set someone free who shot his father Paul? Y&R spoilers also tease that Dylan and Paul have a talk, and Dylan is not ready to bond with his new father.

So Y&R fans, are you as sick of Summer and Austin as we are? Do you think Avery will betray Dylan and help his father’s shooter? And, did Ian really steal Sharon’s daughter from the hospital? How did Sharon not know that she gave birth to two babies instead of one? Share your thoughts and theories in the comments below and don’t forget to check CDL tomorrow for more The Young and the Restless spoilers.