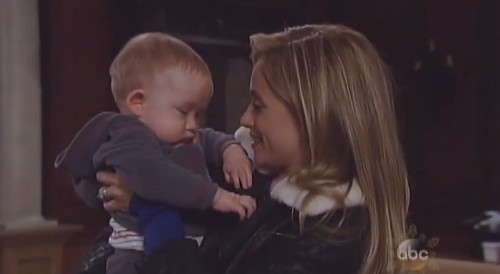 Dun dun dun. Baby secrets are always the best type of secrets, and General Hospital is giving us a biggie. As we know, the identity of Baby Ben’s parents hasn’t exactly been a secret to us in the audience, but most of the characters on the show have been oblivious to the truth. But that’s all about to change, as Liz gets proof that Baby Ben’s parents are actually Dante and Lulu. And guess when she finds this proof? While attending Nikolas’ and Britt’s engagement party.

So will Liz go ahead and tell everyone? Will Nikolas forgive Britt? How will Britt even react to this? And will Dante and Lulu try to get their baby back, and how will they go about it?

The writers behind General Hospital are promising us a lot of drama in the upcoming episodes, and head writer Ron Carlivati revealed, “The audience has known for a while that it’s Dante’s and Lulu’s baby and at some point, you gotta pull the trigger. And we wanted to get Nikolas and Britt to a point where there are higher stakes, hence the engagement and the engagement party. So, here is Britt poised to have this fairytale ending and marry this prince and have this romantic, beautiful engagement party, but is it all about to come tumbling down? Dante and Lulu are at the party and you’ve got this secret bubbling at the surface. Britt is feeling happy but guilty.”

She apparently confides these feelings in Brad, and he in turn gives her advice to vent her feelings. However, she decides to follow his advice – but ends up venting to Liz! Unfortunately, Liz isn’t the biggest fan of Britt and she only came to the engagement party because of her long friendship with Nikolas. But when she gets the goods on Britt, she has mixed feelings. On the one hand, she feels vindicated because she was right about Britt all along. But on the other hand, she knows Nikolas will be crushed when the truth’s revealed, and she doesn’t want to hurt him. So what will she do? She knows she has to tell Nikolas, but will Nikolas end up forgiving Britt?